I’ve been wanting a new iPhone for some time. It’s silly, because there’s nothing wrong with my old one. I’ve had it for over four years, and even if I can invent problems with it to justify wanting new technology, it works fine.

Today, I ordered a new one anyway. Of course I need 4G speed, a better camera, and Siri. Because… Well… Uh… It's available...?

My boss calls it circuit-lust, and I think he’s right. My mind is so soaked in commercials it can’t tell “need” from “want” anymore. 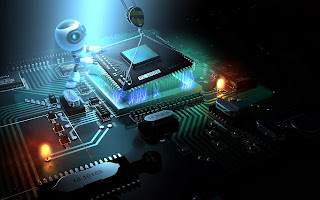 Is it a geek syndrome?

I'm the same way with computers. They're new and shiny.

They have new processors, faster memory modules, and clean keyboards (LOL). I had a perfectly fine laptop as well as a new desktop computer, but I still paid an arm and a leg about a month ago for a new laptop. It can compile videos in 12 seconds, and it's all silvery and shiny. So pretty! (That I can justify since I actually work with making videos and editing large images, and I usually run more than one computer at once.)

Anyway, I’ve had a bad conscience all day since placing the order for the phone. Not necessarily over spending all that money on a new phone - I can find ways to justify that to myself - but over abandoning my old phone who has stood by me through so much. We have a comfortable relationship, the phone and I. It’s like a worn pair of shoes that fits just right, or a favorite chair.

Luckily, I found a way to make me feel better about it. I’ve cleaned it out and I’m giving it to hubby. He can use it as an iPod, because he doesn’t have a gadget to watch videos and listen to music and such.

It's probably a good thing that I live in a time where we haven't quite perfected household robots and androids yet. I get so excited over every new gadget - Google Glass and that new Samsung watch make my eyes glaze over - imagine if there were machines available that actually walked and talked...

How is your relationship with technology?
Labels: life technology