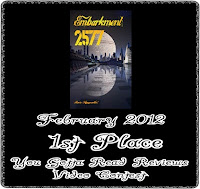 Good news! Thanks to everyone who voted, my video for Embarkment 2577 won first place in the YouGottaRead videocontest! Besides joy and bragging rights, I won several months worth of advertising space! Happy Joy Joy!!! I will have a video in the March contest too; the trailer for Kidnapped is already up on their website, but voting doesn't start until later in the month.

Other exciting news; I am in the midst of the first round of edits for "Kidnapped," and May 11 that seemed so far away this fall is closing in rapidly. The book will be here before I know it!

I bet my editor got a few good laughs from the first read-through; my head knows exactly what happens and what every page is supposed to say, and I never even noticed I'd written clever things like, "time seized to exist." What exactly did I think it was doing? Having a seizure? Did someone grab it? I used to blame being foreign, but that excuse is worn a little thin by now, so I'll have to come up with a new one. =D Maybe I can say my dog walked on the keyboard; it happens more often than one would think - especially if he hears sirens outside. The result is usually along the lines of, o090om,ljkl;lk, but with a little training he might learn to type. (Yes, I am very optimistic about his abilities, but he's part border collie, so it could happen...)

Meanwhile, check out my new video for "Invasion and other short stories." Invasion is the main story in the book, and the one most like my normal way of writing.