The Birth of Ms Callaway


A long time ago, in the distant past known as 2007, I was role playing on Myspace together with a group of people I'd never met. At the time, I couldn't even guess just how big an impact this would have on my life; I ended up moving to the other side of the world, and diving into a new career. Michelle in Canada started me off and taught me how to do it. Carol in Australia taught me skills I use in my daytime job today. Mike, well, I married Mike, LOL! Sarah in England, Nikki in Norway… So many wonderful people I would never have met without the Internet, and they still mean the world to me.

Writing stories together allows characters and story lines to take on a life of their own in a way they never do when sprung out of only one mind. Characters are shaped from their interaction with other people and through events outside their player's control. It's really a fascinating experience, and for a few years, I was completely engulfed in this world.

As years passed, life moved on and changed, and I no longer had the focus to keep up with Myspace. The story lines move so quickly, and if you look away for a week, at least a month or two have passed in the character's time. I still wasn't able to let go of my girl; by now, Maria Callaway had a long history, and a personality and character completely of her own. I started to play around with ideas in my mind. She was already a person, and I spun stories around her, added some mythology, and sprinkled with inspiration from my Myspace friends.

I had a pretty good visual image of Ms Callaway's world; I knew what it looked like and how it worked. Now, a bigger story line was taking form. I tried to change her name; it seems presumptuous to write about someone sharing your own first name, but no matter what I called her, she changed too. I finally submitted. Her name is Maria Callaway, and Maria has to be one of the most common names in the world, so it's good enough. 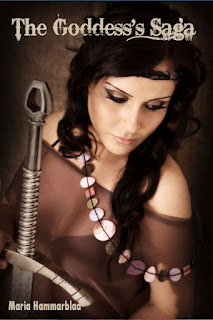 After knowing her for five years, and working on her in book form for almost three, the first three novels about her life are done. ("Touch of the Goddess," "Wrath of the Goddess," and "Return of the Goddess.") To celebrate, I have made a collection volume with all three books, called, The Goddess's Saga. Holding the proof filled me with a very satisfying feeling of accomplishment. It's big, nice looking, and solid. Somehow, much more "real" than other books I've written.

Observant readers will notice that the end of the Goddess's Saga isn't really an end. There are many unanswered questions, and even though each novel can be read separately, with a beginning and a conclusion, we have yet to reach the end of the story. Maria, Stephan and their friends still have a number of adventures ahead of them, and their final fate is still hidden.  I do have plans for a fourth novel that will tie it all together. I doubt it will be ready during 2012 though... Until then, check out "The Goddess's Saga!"