Today, I am delighted to welcome Gail Delaney to the blog. She'll even share an excerpt from her brand new book!  Gail has been actively writing 'for publication' since 1996. The first novel she ever wrote is still sitting on her computer, waiting for the major rewrite that will make it acceptable. She says she has learned a great deal since writing that book, and it shows when she looks back at that rough draft.

Gail has had several novels published in the genres of contemporary romance, romantic suspense and futuristic romance. Her novels have received several nominations and awards since she was first published in 2005.

Gail and her family recently moved from the cold and blustery east coast to Southern California, and is loving every moment of sunshine she can soak in -- without risking a sun burn. 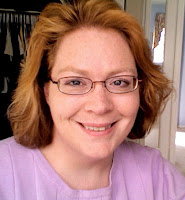 After far too long of a hiatus, I am exceptionally excited to announce the sequel to The Phoenix Rebellion is finally released. Phoenix Rising Book One: Janus is the first in a four book series that picks up about a year after the end of The Phoenix Rebellion, and there are a lot of familiar characters along with some new heroes and heroines fighting for the survival of Mankind.


How does your family feel about having a writer in the family? Do they read your books?


What do you love about your latest book?

I love the uniqueness of the characters. They are like no hero and heroine I've ever written, and while it was definitely a challenge, I loved it. I loved being able to return to old friends and catch up. That's why I like writing series. You don't have to let go so soon.


Do your fictional characters develop on their own, or do you have their lives planned out in advance?

Oh, completely on their own. I had a general starting point, but things went down in this book completely differently than I planned, anticipated, or even imagined when I started.  I usually have a good idea of their past, although even then sometimes I 'learn' things as I go; but, I try to allow them to develop organically as I write. Whenever I try to force certain scenarios or manipulate events to incur a certain reaction from my characters, it always reads as contrived, so I have to let events -- and their reactions -- unfold naturally.


Do you base any of your characters personalities off people you know, and if so, do you tell them?

Never in whole, no. Sometimes my characters have certain traits or quirks I attribute to someone I know, but I've never fully modeled a character after someone point for point. For instance, Michael Tanner of the Phoenix books has an abiding love for breakfast. Once you know his history, you know better why, but overall he just enjoys food. He enjoys eating, but especially breakfast. Pancakes, waffles, eggs, bacon... especially bacon... fruit. Whatever. This I took from my son, who was only about 7 or 8 when I wrote the first Phoenix books. Even then, his love for breakfast was immense. Still is.

I've seen a bit of a lot of people I know slip into my characters. Sometimes good, sometimes bad. To me, things like that make them human.


Tell us about your all-time favorite character (of your creating.) Is he/she modeled after a real person?

Funny that I talked about Michael Tanner in the previous answer, because he is by far my favorite; there is Michael, and then there's everyone else. :-)

But it is his soul that makes him unique. Michael is a study in contrast. In some ways, he has aged far beyond his years for the experiences he has survived and the losses he has known. And yet, he is also very pure and naïve. Untainted in his views of the world. He loves with his entire soul, not just the woman he loves but his family, his friends, his child.

Michael is a challenge to write because his life experiences have affected him in ways I could never imagine surviving, but he is also liberating to write.


When did you discover you are a writer? Was there a specific catalyst?

I have been writing since I learned how. I used to write poems and songs and short little stories when I was a kid. In fourth grade, my best friend and I wrote stories about women superheroes rather than playing with games or toys. I wrote a fantasy novel when I was in high school.

My mother passed away in October, and I was helping my father gather her things and go through papers. While doing this, I found a metal file box. In this box was everything -- and I mean everything -- I had ever written. Every scratched out poem, every draft of every story I'd done. Every school paper I was published in. I realized that day my mother had seen in me something I hadn't accepted yet myself.

I was a writer.

In January 1996, I began writing my first book for the purpose of seeking publication. That book has never been published because I didn't know a single thing about writing when I wrote it, but I intend to edit it one day to get it published. But that book led to another book, that I did have published. And another. And another.

If anyone would like a free prequel short story to the entire Phoenix series (it falls specifically before The Phoenix Rebellion, but would serve as a great introduction overall), they can email me at gail@gaildelaney.com and I'd be happy to share. 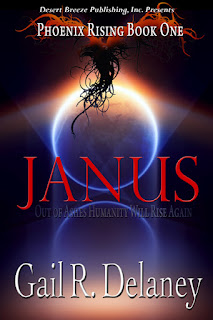 It's been a year since Humanity rose up against their alien oppressors and took back Earth from the Sorracchi. The war left Earth devastated, crippled, but not beaten. Under the leadership of President Nick Tanner and in collaboration with their new Areth and Umani allies, the Earth seeks stable ground again.

John Smith of the Areth was a soldier before his queen asked him to serve as ambassador to Earth, and he is out of his element. Restricted in his position from carrying a weapon, he has no way of defensing himself or his adopted son when the Xenos -- a group of Humans wishing to purge the Earth of all alien influence -- decide they want him dead.

Jenifer is a soldier for hire, and answers to no one but her own common sense. She first refused the "job" of serving as John's bodyguard, but a glimpse at the heart of the man convinces her to accept the responsibility.

John has two faces: a soldier and an ambassador of peace. Jenifer has two faces: the steel-skinned warrior and the forgotten person she once was. Too many people hide behind masks, and it's those hiding who want John dead.

He stood at the bank of large windows facing out onto the city, his back to her. Standing in the darkness with the moonlight the only source of light, Jenifer had to admit Ambassador Smith had certain attributes most women would find attractive.
It was obvious he hadn't thought about being prepared to make a quick escape when he left his bedroom. He wore only a pair of loose fitting pull-on pants hung low on his hips. They were a rich blue color, and by the sheen on the material, possibly some type of silk or similar fabric. His feet were bare, and he wore no shirt, leaving his back exposed. He stood completely still with his arms crossed and his head bowed, pulling the muscles along his back and shoulders tight enough she easily saw the definition.
Okay, so not half bad. He was obviously fit, so he probably wouldn't be a total waste in a fight. But if someone else didn't kill him, she was seriously considering it.
"Did you need somethin'?" he asked, his clipped tone barely carrying across the room. He never raised his head, never moved.
"Yeah," she said, crossing the space. "I need you to not be so damn stupid."
He raised his head slowly, unfolding his arms to rub his palms over his face, sniffing softly before he turned his attention to her. "Excuse me?"
"I said I'd really like it if you wouldn't be so damn stupid, Ambassador." She took the security core from her belt, snapped one of the electrodes from the back and slapped it unapologetically against his chest over his heart. The core interface immediately came to life, several graphs recording the various biorhythmic information she needed for the globes.
"What the hell are you doin'?" he ground out, reaching for the electrode, but she shoved his hand away.
"What President Tanner hired me to do, keep your ass alive. But if you're going to make it harder for me, I'll quit in the morning." She pulled a stylus device from the side of the core and grabbed his hand, jabbing a finger with the tip. "You know, I heard you were a soldier back on Aretu, so I thought you'd have enough sense not to stand in front of an exposed window."
He looked from her to the window, either oblivious to or indifferent to the fact she held his hand, squeezing several drops of blood from his finger into the stylus tube. The core twittered in acknowledgement of the data.
"I wasn't--"
"Thinking? Obviously." Finished with retrieving the data she needed, she snapped the stylus back into place and gripped the edge of the pad on his chest. Jenifer contemplated just ripping the pad free without at least pulling the skin taut to ease the removal, but in the end she remembered she hated ripping off bandages just as much as anyone else. She laid her hand against his warm skin, bracing it slightly before gripping the electrode edge and yanking hard.
"Bloody hell!"
"It'll hurt a hell of a lot more if you get hit with a long range pulse blast." She eyed up the window and the surrounding cityscape, as much as she could call the broken horizon a city. "I wouldn't be surprised if these Xenos went retro and took a shot at you with one of those old time projectile guns. Messy, but they'd cut through this glass like butter."
She half expected him to scramble back from the windows, but he didn't. He just looked out again.


Thank you for coming over, and for sharing an excerpt of your book. It's been a true pleasure to have you here!