I've always been a little eccentric. At my job back in Sweden, people would just assume anything strange could be accounted to me. I had peculiar cars, lived in a gigantic house in the middle of nowhere, played bass in a rock band, brought my doggie to the office from time to time, and occasionally forgot to put on good clothes. (In my book Undercover -- TBR September 11 -- the main character Jenny recalls how she went to work in a pyjama top and had to wear an electrician's jacket all day. I did that. *cough*) 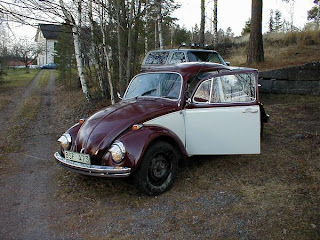 I spent a winter renovating this car. I called her Wilma. I got some help with the welding and paint job, but I did an enormous amount of work on it on my own. It ran well sometimes, and not at all other times. In the winter, the heat worked really well on the driver's left knee...

One day a colleague brought a horse in a trailer and parked it outside the office. They were going to the vet later in the day, and bringing it along was a perfectly reasonable thing to do. I was unaware of the opportunity to go pet a horse until someone tucked their head into my room and said, "You have a pretty horse." I said, "I have a what?"


I don't do these things on purpose, they just sort of happen. When blessed with a curious mind, you just have to try some things, to see what would happen.

As much as I try to be normal and fit into society, eccentricity has a way of shining through. A friend said, "Just tell people you're an artist." I tried it at work one day, when someone said something along the lines of, "Not even Maria would..." I said, "I'm a writer, you can't expect me to be normal." Worked like a charm, hahaha!

I got new neighbors a few weeks ago. The old neighbor was sort of used to me, and I don't think he would have cared if I practiced playing accordion with my feet in the front yard. The new owners, on the other hand, have been in for a row of surprises. Don't get me wrong -- they seem super nice and pretty cool -- they're just not used to me yet.

In the mornings, I sleep in as long as the dogs will let me, and then I try to hurry outside because they need to go do their business. Sometimes we take in foster dogs, and it becomes quite a gang. One morning, the new neighbor peeked out the window just in time to see me, dressed in a robe with my hair standing to all sides, pulled by the furry gang, headed for the back yard. I waved and smiled, and he looked positively shocked. 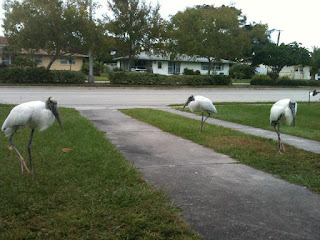 A couple of days later, my friend the wood stork came by. He's usually on his own, but he sometimes bring friends. If I don't see him, he peeks in through the living room window. We've taught him to catch, and he catches better than the dogs. (I think he'd like to live inside the house if I let him.)

Anyway, I was standing outside feeding him, he was about a foot away from me, catching pieces of bread, and I was telling him what a good bird he is. This time, the neighbor tried to appear unfazed but he also had a really big smile. It's hard not to be charmed by these guys. 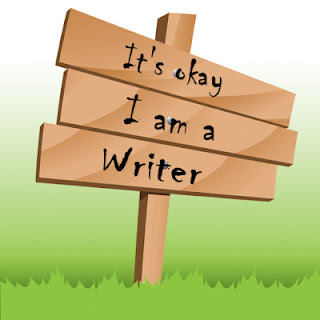 From time to time, I think it's fun to shoot zombies in the back yard. They're not real zombies, of course, they're made of paper. I either shoot them with bow and arrow, crossbow, or some form of airgun. I have an airsoft gun. (You know, one of those that shoot brightly colored little plastic balls.) It runs on a small CO2 capsule, and it goes off with a neat little poof. Of course, last time I was out to kill the zombie, the poor neighbors were also in their yard, on their side of the fence.

I aimed for the zombie and squeezed the trigger. The poof was louder than I remembered. Big commotion on the other side of the fence. I wondered if I should call out, "It's okay, it's just me," but that felt kinda dumb. I squeezed off a few more plastic balls and exclaimed, "Ha, paper zombie, I got you!" The world is safe, the paper zombie is dead...

I wonder if I should make a sign for my lawn, "It's okay, I'm a writer." The sentence could explain almost any eccentric behaviour!
at July 31, 2012