I started on a blog about editing, and lost focus about half way through it. I want to talk about backyard toys. We can pretend it's a follow-up to my Nerf post the other day. Right?

Last night, Mikey and I went shooting airguns in the back yard. I wanted to play with my pellet rifle. I have a Walther lever action CO2 rifle. If those words sound like blah-blah-blah, let it suffice to say it's a step up from a toy, but less powerful than a hunting rifle. It shoots metal pellets, propelled by a CO2 cylinder in the stock. I like it because it's made from "real" materials like wood and metal, and it both looks and feels solid. I think the wood is pretty.

We usually shoot paper zombies, but yesterday all the zombies were shred to pieces. Mikey brought out some small soda cans and a little wooden dude, about an inch and a half tall. I thought it was a shame to shoot a wood project in progress and said, "What are we gonna do with him?"

He's usually spot on, but this evening his CO2 capsule was running out, and wooden dude was safe. My turn. I shot the cans on each side of the little dude, and aimed for him. At 30 feet, he almost disappeared behind the sight. I pulled the trigger and saw him fly through the air until he hit the backstop. "Yay, I got him!"

Not the coolest thing to say - I should pretend I knew I would be able to hit him - but it was sort of exciting.

I snatched the little guy up from the ground, and ran back to Mikey. "I really did get him, look, look!" 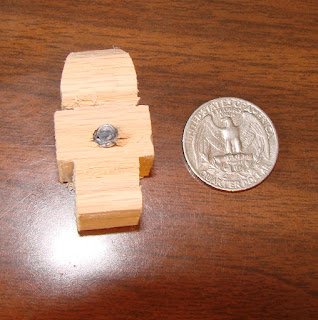 I think he's safe from the shooting range from now on. He's cool and buys me bragging rights.

A real enthusiast would be able to tell you all the details about the pellet he's shot with. It's... a pellet. Flat head target pellet. I know the size, but that's just so I'll be able to buy more, haha. When not squished into a target, they look like this: 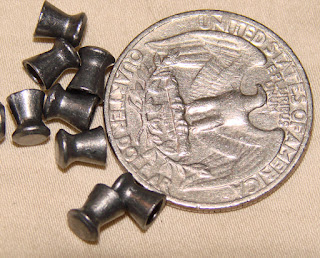