A few weeks ago, we got a new foster dog for Ewenity Farms. The rescue coordinator named her Erella, she says it's the Hebrew word for angel. I call her Ellie for short - it's easier to say. 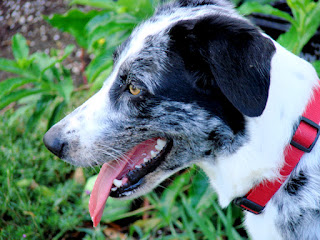 Anyway, Ellie comes from Texas and is about a year old. She was pulled from a shelter only a couple of hours before her intended death. From what I understand, the shelter was in the middle of nowhere, and it was hard enough to find someone to go pick her up and take her to boarding - a couple of hours drive. All the way to Florida was out of the question.

Ellie was safe, but still far away from a permanent solution. She ended up staying in boarding for two months before someone could drive her to Florida. The lady who finally did it was a trooper - she reached my house around 1 AM, and had been up driving dogs for almost 24 hours. She had a van filled with dog crates and still had a few places to go before she was done. Just imagine stopping along the way and walking all these dogs! Kudos! The driver said Ellie was a bit shy, but when we opened the crate door, she leaped out of the car into my arms and wanted to go to the house.

Mike had bought a toy for her, and the way she reacted, one could think it was the first of her life. That little squeaky was the Best Thing Ever, and she didn't let it out of her sight for weeks. Now she's gotten used to the environment and knows there are toys everywhere, but she's still attached to that first one. If any of the other dogs goes to take it, she hurries over to take it away.

I don't know her history before the shelter. If she ever had a loving home where they bothered to teach her things, all of it was forgotten before she reached us. She remembered one's supposed to do one's business outside and not in the house, but that was about it. Luckily, she's a smart cookie and really wants to be a good girl. It only took a couple of days to learn the basics, like what furniture is okay to sit on. In my house, we sit in the sofa and not on the tables, and we don't climb up on the kitchen counter. She also had to learn some basic manners around the other dogs. They've been super patient with her. (Most shelter dogs I've encountered already know the basics, but it depends on their background. If no one ever cared for them, how could they know how to behave?) 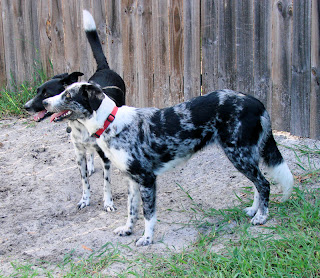 By now, she has learned how to sit and to go into her crate for cookies. She has learned that a human going towards the door saying, "Stay" means "Get into the house, this time, you're not going through the door," and she knows, "Move over" when she's sitting in someone's spot in the sofa. She has a good herding drive and goes to get the other dogs when they don't want to come inside - it's hilarious to see a dog herding dogs.

We're working on lie down and shake, but we're not quite there yet. It's not Ellies fault - we get preoccupied and forget we should train her...

We've been practicing walking on the leash in the yard, and she's gotten quite good at it. A couple of days ago, Mikey decided to take her for a walk along the road. The other dogs and I watched from a window. She did great walking along our yard. When they reached the neighbour's house, she started to tug to go back, and one more house down the street, absolute panic. Mike turned around, and Ellie made him run all the way back. (My dogs looked about to fall on the floor laughing.) I opened the front door and she leaped inside, into my arms, looking like, "Mommy, mommy, I couldn't see the house, and that was so scary!")

We'll need to go for many super-short walks, just a house away to start with, so she discovers it's fun and not scary, and realizes going for a walk doesn't mean anything bad.

Ellies future? Well, she's here now and being spoiled rotten. She's still discovering the world, and small things like getting food every day still makes her happy-happy-happy-happy. If a home shows up where she'll get it even better they can adopt her, of course, but I think all of us are sort of hoping it won't happen. I know we're not supposed to keep all dogs (we've been good, we've adopted out many of the foster dogs that came our way), but some of them are really special. I love seeing her discover the world.
at August 06, 2012

Email ThisBlogThis!Share to TwitterShare to FacebookShare to Pinterest
Labels: dogs