The corridor of horror

As much as I would love to say I live off my writing, it wouldn't be truthful. Maybe one day, but not yet. I usually whine when I have to go to my daytime job, not because I don't like it, but because I have to interrupt whatever I'm doing. The grand adventures playing out in my mind seem much more important than mundane tasks that make actual money.

I like many parts of my job. There are administrative pieces I hate with a passion, but I also spend a considerable amount of time doing creative work, and those hours are quite pleasant. I design catalogs and marketing material, work with social media, and write for websites. If I could trim off all the administrative mumbo-jumbo, the job would be perfect for me.

Anyway, it's a small company located in an old building. Downstairs we have production, and upstairs are offices. The offices aren't great, but I've seen worse. Getting to them is, however, the gruesome part of my day. There's a long corridor filled with bugs, and I am afraid of bugs. I don't want to kill them or anything, I just don't want them to be near me. Everyone's afraid of something - many people fear dogs, sharks, tigers, heights, flying... If you want to see me jump, show me a spider. In my imagination, the smallest arachnid is the size of man's fist. (Lots of Black and Brown Widows in Florida too. They're super-scary.) 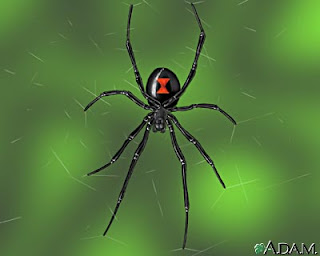 To be fair, I haven't seen any Widows at work, but the visible creeps are plenty scary.

I've only been with the company for a couple of years. Everyone else are so used to the Corridor of Horror they don't even see the spiders crawl along the ceiling anymore. I walk through it with my eyes darting around, trying to move around all the cobwebs and anything that moves. My boss doesn't believe in bug spray, he says we're ocean-something-or-other-certified, and there will be no spraying of the premises. Sometimes, if I whine enough, someone will go down with a broom and sweep the ceiling. That helps for about two hours, then the spiders are back.

I met a Palmetto bug the size of my shoe the other day. I stamped in the floor and hoped he would go away. He probably sensed my fear; he charged towards me, and I ended up jumping high in the air and running for my life. Scores: Palmetto bug 1 - Maria 0. Good thing no one saw me; they would have been rolling on the floor laughing, happily unaware of the multi-legged dangers that lurk there. 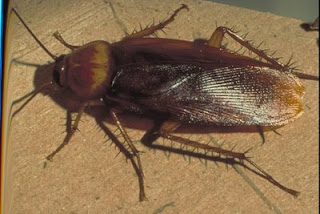 The Corridor of Horror also leads to the restrooms. One day, there was a spider in the ceiling, and I didn't see it until I left. Imagine if it had fallen down on my head. That would have caused a scream they would have heard all the way upstairs. I went to my colleagues and whined, and someone went down to remove it. She said, "Oh Maria, that spider was tiny." (It was about half an inch with all the legs - to me, that's huge.)

There's an upside though. I'm currently writing on a little something where the heroine needed to go through sometihng really scary and overcome her fears to find the hero and ultimately save him. I modeled the scary passage from The Corridor of Horror. I exaggerated the amounts of creepy crawlies, and it was perfect.
at August 16, 2012