Since I can't think of anything to write about -- funny, isn't it -- I've decided to share an excerpt from my novel Undercover. 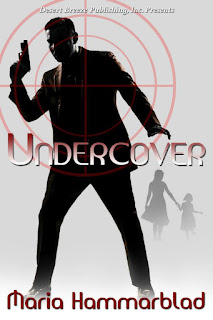 Alex gambled the man wouldn't shoot. He took one step closer, and discovered he was wrong. Luckily for him, hands that would easily have held the large weapon a few years earlier were now unprepared for its power, and the bullet grazed his shoulder instead of piercing his heart. Instinct kicked in, and a split second later he snapped the guard's neck. Looking at the man's body on the floor, feeling the fire of the wound spreading through his side, he clenched his jaw and muttered, "Crap." This was another face that would haunt him in his dreams.

Climbing out of the windows and scaling an almost flat wall, he only had two thoughts in his head. One was cursing himself for being complacent; a person was dead because he wasn't careful enough. The other was, "Jenny must never know."

Getting away wasn't difficult. It was a big city with countless opportunities for escape, even for a man with a bullet hole in his jacket and blood pouring down his side. Sidestepping into an alley, he took the time to try to stop the bleeding at least a little, and to rearrange his clothes to look more casual and less guilty.

It took a while for him to get back to the rented car, and by the time he reached it, he felt faint. Afterwards it would be a mystery to him how he got back to the gas station, cleaned any traces of himself out of the rental, and drove the Chevy the rest of the way home. By the time he got into the yard, he bled through the makeshift bandages he made for himself, and there was quite some cleaning to be done in the car. He ground his teeth and clung to the thought, "Jenny mustn't know."

Somehow, he managed. He got what he deserved. He was alive and he should be grateful; not everyone was so fortunate.

Once the car was clean, he peeled off his clothes. The fabric stuck to the wound and he swore between his teeth in Russian. There would be traces of him in the office, and on the bullet if they found it. He could only hope no one would make the connection to him.

If taking the clothes off was painful, that was nothing compared to the sensation of pouring disinfectant on the wound. He had become a real wimp since meeting Jenny. In the old days, a thing like this wouldn't have fazed him in the least. Now, it justified at least half a bottle of aspirin for comfort. A drink to calm his conscience would have been most excellent, but she would notice that.

He was almost done when he heard a car drive up in the yard and the front door open, and he hurried to slap a bandage over the wound, hide the bloody rags, and pull a clean shirt on. When he went down the staircase to greet his girl, his smile was almost natural.

Jenny didn't seem to notice a thing, and Alex hoped he'd get away with it.

"It's so great to be home early, you wouldn't believe what a day I had. So, what have you been up to? What do you want for dinner?"

He grimaced when she hugged him, and was glad she couldn't see his face. Then, she withdrew with a frown. There were red drops on her fingertips. "What is this? Why are you bleeding?"

The answer, "I'm not" came automatically, and he realized it was hopeless as soon as the words left his mouth. There was no way he'd be able to hide something like this from her long enough for the wound to heal. If not sooner, she'd discover it when they went to bed, or in the morning.

Jenny rolled her eyes and peeled his shirt off. "Men. Let me see that."

He found himself seated on a kitchen chair less than a minute later, trying to think of an explanation that didn't involve getting shot. He couldn't, and when Jenny took the already soaked bandage off, she exclaimed, "Oh my God, what happened to you?"

She looked pale, and he hoped she wasn't going to faint. "Maybe you should sit down, sweetheart."

"You need a doctor, this is huge, it must be sewn. And you need some... penicillin or something so you don't get an infection."

Alex shook his head and reached out for her with his other hand. "No. There can be no doctor. It's just a scratch, and it will heal on its own."

"This is not a scratch."

There would have to be at least a dozen feasible explanations, but he still heard his mouth tell her the truth. "I... uh... I got shot."

She opened her mouth and shut it again without a sound coming out, and he tried to soften the truth, "It's not that bad, sweetheart. There's no bullet in me, so I didn't really get shot, it just brushed me. But if I go to the doctor with a bullet wound, I could just as well hang a sign saying 'guilty' around my neck."

The word guilty made it all worse, but it had been a long day, his side was pounding, he was dizzy from loss of blood, and he couldn't think of any better way to say it.

Jenny mumbled something to herself, and he couldn't quite make it out. It was something about "men," "crazy," and "Russian." She shouted, "You are so lucky I love you. Did you put disinfectant on this?"

He nodded, and she patched it up with surgical tape and bandages, grumbling, "I'm not a field surgeon. I'm not putting a needle in you. This needs to be sewn, but I'm not doing it. If you want needle and thread in your body, you can do it yourself, or find someone else to do it."

Her ranting made him feel better. It was something real, and though he didn't doubt she was very angry with him, her annoyance was real too.

As much as he tried to get out of telling her what happened, he couldn't. By the time he was done, she crossed her arms over her chest. "You are so lucky there's a big hole in you. I will pretend this all happened in self-defense."

She left the kitchen without saying another word, and he got up to follow her, only to sink back down on the chair when the room spun around him. Blood loss came secondary to getting up and following her. He leaned against a counter and trudged on towards the hallway. "Where are you going?"