Weather I'm writing, editing, or doing homework, it usually takes place at home. I like being at home. There's something immensely appealing about sitting in the sofa with my laptop, surrounded by doggies. It's a little hard to type when they want to sleep on the keyboard, but that's okay. :-) 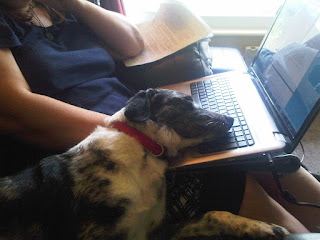 Lately, I've found myself less and less productive. The other day I managed to write one full sentence in 1.5 hours. Considering I have two jobs, go to school full time, and have a family and a few hobbies, that pace isn't good enough.

I used to be enormously productive, what changed? Well, we have a foster dog that likes to climb on me, but she's not really the problem. The problem is... I hate Family Guy.

Okay, that statement might need an explanation. My husband has been spending more time at home than he used to. I like the house quiet, but lack of noise drives him bonkers, and the first thing he does when he gets up in the morning or comes home from work is turn on the TV. Family Guy is his favorite show. If he can't find it anywhere, American Dad, Cleveland Show, or King of the Hill will also do. Funny enough, one of those four is always on somewhere. With any luck at all, the same episode is rerun on several different channels the same day, so you can get to watch it five times in a period of a few hours.

Is that a giggle I hear? Well, repeat the below clip over and over again while trying to write a first kiss. Working well for you?


Besides Stewie being a little pest and all Seth McFarlane's voices sounding the same, imagine the joy of having to hear classics like "Promnight Dumpster Baby," "The road to Rhode Island," or "You got the AIDS" five times in an afternoon. We have a small house, so moving to another room is completely pointless.


Every now and then, I've heard people say the average IQ in a household drops with every TV set in the house. I didn't use to believe it, but I swear, I feel myself get dumber every time I have to hear the theme song to one of those shows.

I used to solve the problem through going outside. I've spent many, many hours sitting in the little shady spot right outside our front door, and a big part of my upcoming novel Flashback is written right there.

We have new neighbours since a couple of months, they brought a brand new stereo when they moved in, and they insist on having it outside. That wouldn't normally be a problem; I love all sorts of music except Jazz and Jimi Hendrix. The latter is related to the former; the drummer in Jimi Hendrix Experience used to play jazz and kept playing jazz with Hendrix. To me, all Mitch Mitchell's syncopations paired with Noel Redding's guitar-style bass playing sound like someone falling down a very long set of stairs. (I know Hendrix is supposed to be a guitar God, and I'm not a complete heathen: I like him just fine with the Band of Gypsys.)


Anyway, guess what the neighbours' favorite music is? Jimi Hendrix Experience. Their stereo is on 24/7 and located about 10 yards away, so working outside is out of the question. Seriously, even if I loved Hendrix I don't think I would be able to write after hearing Purple Haze 35 times in a row. It drives me crazy when I take the dogs out, and I think I know all the lyrics now. They're really nice too, so I don't have the heart to go over and ask them to put on something else...

Are you giggling again? Okay, repeat the below video over and over while trying to write an A-paper on Redbox's strategy compared to Netflix's strategy. It needs to be complete with a SWOT analysis and take Porter's five forces into account.


I toyed with the idea of getting an office somewhere away from here. A quiet little spot where I could go and do actual work. Seriously though, who am I kidding? Even if I could afford it, it wouldn't solve the problem.

I found another solution: I bought noise-cancelling headphones. They were really expensive, and I shouldn't have spent this much money on something like headphones, but they're worth every cent. I put them on and turn on some music (that I like, lol) and the world around me can sing "Purple Haze is in my brain," "I stand up next to a mountain and chop it down with the edge of my hand" or "Cowboy Butt Sex" all it wants, because I can't hear it. (Insert crazed laughter here!)