Dark Days of Promise by Shaunna Gonzales is a brand new book, it was released September 20th. I've been curious about it for some time, and after interviewing the author I've been counting down the days to its release date. I've read about 1/4 of it, and thus far I love it.

The characters feel real. In many books you can tell they're made up -- which they are; it's fiction -- but Shaunna's gang could very well walk out of the pages and enter one's daily life. The main character, Vicki, is likeable, and her thoughts, intentions, and problems are completely believable. When they're visiting her neighbour, I can almost feel the warmth of the kitchen and smell freshly baked cookies. There's also unexpected danger and mystery in just the right amounts to keep you turning the page to see what will happen next. It's actually extremely exciting just where I left off to go write this blog, but I won't say anything more about it; I don't want to spoil it for everyone else! =D

I admire Shaunna's way of describing children. I've seen many writers try, stumble, flail their arms in the air, and fall on their noses. When I read about Vicki's kids I can see them for my inner eye, and I believe they exist.

On Amazon, the book can be found in cryptic categories such as "Religious fiction" and "Christian books and bibles." I'm normally extremely skeptical to religious fiction, regardless of which religion it might be. Too many authors set out to convert readers with blunt force, or add a band-aid of Godliness somewhere in the end just to get it in there. It makes want to scream, "I just want to be entertained, so stop trying to convert me! Leave me alone!" Shaunna Gonzales does not fall into this trap. In Dark Days of Promise, the mentions of faith come naturally and I accept it just as I accept people around me are Christians, Hindus, Muslims, Pagans, and so on.

Religion is there, but in an elegant, non-threatening and non-coercive way that makes this book stand out as something that can be appreciated by both Christians and non-Christians.

I warmly recommend the book, and will return with a review when I've read it all. Shaunna will return to my blog in October, keep your eyes open for her visit. 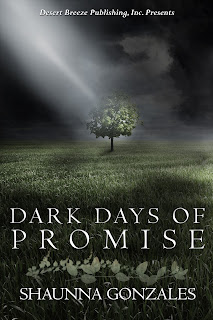 Blurb:
While Vicki’s children grapple with the death of their father -- a man whom she’s successfully fabricated as loving, a lie her rebellious teenager recognizes -- she must find a way to support her family and find a role model for her boys. She never intends to fall for Staff Sergeant Chase, her best friend’s son, who suffers from Post Traumatic Stress Disorder (PTSD). She’d much rather choose a safer man to love, but her children have a voice in the decision she makes. With two deaths to deal with, a suitor after her money, a rebellious son, and Sergeant Chase’s repeated attacks, she can only hope to survive the danger she faces. If she doesn’t, her children will be left without either parent.