Everybody together now, let's say, "Weeeeeee!"

This weekend is the Florida Writer's Conference, with a banquet for the Royal Palm Awards. I wanted to go to the conference, but for a number of reasons it just didn't work out. For a while I thought I'd be able to pop over to Orlando and at least go to the banquet, but my car started to act up, and I got vivid images of being stranded by the side of the road in the middle of the night. With a to-do list long as my leg and a nearly empty bank account, it just wasn't meant to be.

As I ran around all day yesterday, trying to get at least most of my must-do list ticked off, I forgot all about it. That is, until I got a message on Facebook, saying, "Congratulations! Not only did you win First Place in the Florida Writers Association Royal Palm Awards for your screenplay, you also won the Dahris Clair Award for best new writing!"

I bounced and yelped, "Mikey, pause the movie, you've gotta see this!"

I knew I was a finalist, but I didn't think I'd win anything. Not in a million years! Seriously, I'm Swedish, I learned English in school. When I grew up I had a patch on my jacket saying, "Have a Nice Day." I asked my mom how to say it, and she sounded it out in a very Swedish way. I went around saying something like "Hawe a nieese daawy" for about a year.

Anyway, in the off chance I'd win, I asked George Mindling from the Sarasota chapter of FWA to pick up my award for me. Just in case. I'm so happy I did, and that fate prevented me from going myself: I can imagine an overwhelmed version of me stuttering, forgetting English, probably crying too. I'm pretty good at speaking to large groups of people, but last night I almost forgot how to talk sitting at home in the sofa! (I'll go next year. I need to start going to the chapter meetings too.)

George sent me photos of the awards. This is the most handsome golden dude I've ever seen! 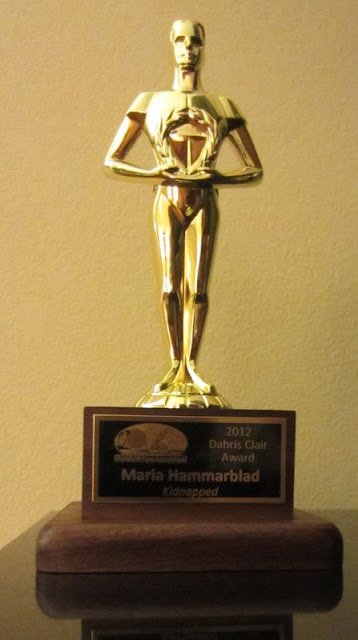 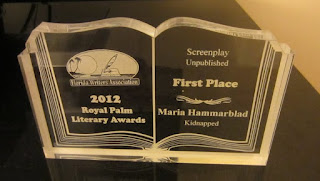 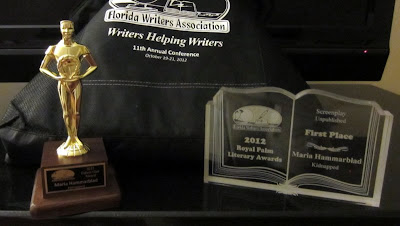 Waking up today felt like Christmas Morning. Yesterday, I woke up as a double-working student with a to-do list big enough to cover the kitchen table. Today, I woke up as an award winning screenwriter. Life is good!
at October 21, 2012