Setting the Halloween Mood, a creepy excerpt from A Legacy of Lies.

Just in time for Halloween, Stephenia H. McGee kindly shares a creepy excerpt from her book A Legacy of Lies. It will get us in the right spirit!

I have to admit I haven't read the book myself yet, even though it's on my TBR list, so I looked up a review from my author friend Patty Froese.

She says, "This book has it all: a nice quick plot, a massive castle, cowboys, a dark mystery, a cold seductress and a story that leaves you thinking about it long after you've finished the book." Sounds pretty good!

Excerpt from A Legacy of Lies

The eerie silence of a moonless, starless night engulfed him.

Jim shivered. It had been high noon only a few minutes ago. Had he fallen asleep? He didn't remember being tired. He shook his head and tried to focus his groggy mind. He peered around cautiously. Where was his horse?

A rustling sound in the bushes startled him. His eyes darted to investigate.

No, wait. There it was again. Off to the left. His eyes strained, searching for the slightest movement or shape. Something. Anything.

He felt like a kid afraid of the dark.

Get a hold of yourself, man.

Fingers of fear teased along the back of his neck. The hairs stood on end. He shivered. Where was that horse?

"Ciervo!" His voice sounded weak even to his own ears. He tried again. Now he was completely hoarse.

Swallowing the panic rising from the pit of his stomach, he took a cautious step forward. He heard stirring in the woods behind him. Squirrels? He listened intently.

The noise came again. No. Definitely not a squirrel. Something was pacing in the woods. Deliberate. Stalking. Jim's mouth went dry.

His heart raced and he looked desperately around, scanning the darkness. Blackness blanketed the meadow. Jim hoped Ciervo hadn't wandered too far. He started to walk. Slowly. Calculating. He couldn't tell in what direction he moved.

His cell! He could use it as a light source. Jim's hand brushed at his hip. It wasn't there. He frowned. It always stayed on his belt. He never left the ranch without it.

Jim's eyes strained, but he could barely make out his surroundings. The farther he walked, the darker it got. His breathing came in quick, rapid intakes.

A shrill sound broke the silence. His heart leaped.

Where was he? Was the mountain lion after him?

They were pounding quicker than his rapidly drumming heart. A shadow appeared about thirty feet in front of him.

It wasn't his beloved horse. It looked like something galloping up from Hell.

The horrid creature ran wildly toward him. The cold air caused the hot breath to billow from its nostrils like a smoking dragon.

The monster's eyes looked like no earthly thing he had ever seen. The bulging orbs had a luminescent shine that came from deep behind the pupils. In the pitch black they glowed like a ghostly beacon.

The horse-shaped beast lowered his head. The creature was preparing to slam into him. Jim threw himself out of its path and landed sharply on his hip. His right thigh slammed into a large, extruded boulder. Fire shot down his leg. Ignoring the pain, he jumped to his feet, eyes probing the darkness for the crazed brute. The ghostly version of Ciervo had vanished.

Despite the cold, he began to sweat. Jim felt eyes boring into him. Someone or something watched him. He was exposed. Unprepared. His heart hammered in his chest. His body refused to move.

Another sound. Different. It wasn't rustling limbs or bushes, and it certainly wasn't the horse's wild hoof beats. It was quiet, like a soft whisper. Crying? No, calling out for something.

He strained to catch the garbled words. The voice grew louder. More urgent. Still he couldn't make out the woeful tone. Then, as if his brain finished translating some cryptic code, the word became clear.

Again. Louder this time. "James... James..." The voice rose and fell in the darkness. Its eerie sound slithered into his ears.

"Hello?" His voice echoed hoarsely. He held onto a feeble hope the voice came from someone nearby lost in the dark along with him. No one here knew him by that name. He stood holding his breath, listening.

Suddenly, a freight train of frigid air knocked him backward. Terrified, he dared not to move. The voice came again.

An insidious roar erupted around him. Hot, musty breath bathed Jim's face. He struggled backward. He couldn't quite make out the figure standing over him. The silhouette was enormous. Its shoulders spanned at least four feet. An odd-shaped head swayed from side-to-side.

Paralyzed with fear, Jim lay helpless. The creature rose to stand upright. Seven. Eight feet tall. Jim gasped for air. His feet tore into the soft ground, trying to gain footing. Desperately trying to get away. The creature came crashing toward him.

A Life Built on a Legacy – A Legacy Built on Lies 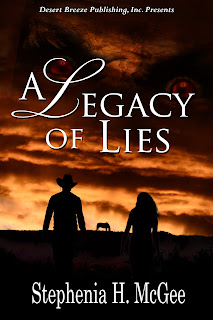 Sarah Sanders was always the reasonable sort, until she kissed a cowboy against her better judgment. Feeling strangely drawn to this mysterious ranch hand with a dark past, she finds herself swept up in an adventure that will force her to question everything she believes.

Jim Anderson’s cowboy gig is going pretty well. Except for one thing – he thinks he's going insane. Night terrors, hallucinations, and now a girl he has no business falling for. It’s better to keep his distance. But when Sarah is nearly killed, he will risk it all to save her.

When tragedy brings him back to the home he tried to escape, Jim will have to face the truth behind his strange circumstances and hope that Sarah will believe him. Digging up the answers to questions long buried, does he have the strength to face the dark family secrets that threaten to destroy them both?

Buy the book at Desert Breeze Publishing or on Amazon. It is also available at Christianbook.com.
at October 31, 2012