Sidetracked onto... trees? Who would have thought.


From time to time, I do serious research for my books. Enrolling in a college class type of serious. Most of the time, Google is fine. It sidetracks me, though. I mean, is anyone able to even get near Google without ending up reading something super-interesting they didn't intend to see? Same thing with Facebook. I can't even count the times I've gone on Facebook for a quick peek, and found some of my author friends have been researching something interesting enough to post. Wham, a couple of hours gone and head filled with new and useless information.

Working on the re-write of Brand New World, I stumbled over some really interesting facts. 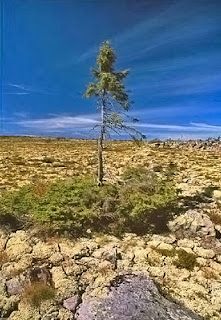 The world's oldest living tree stands in my home country - Sweden. It is a 9,550 year old spruce. Actually, the trunk is "only" 600 years old, but the roots are 9,550 years. The photo to the right is taken by Leif Kullman at Umeå University's department of Ecology and Environmental science.

The world's oldest plant is a 13,000 year old oak that survives by cloning itself. The Californian bush started its life during the last Ice Age.

There's something even older. It's not an individual tree, but a colony of Aspen in Utah. The 105 acre colony is made from genetically identical trees connected by a single root system, and got its start over 80,000 years ago. It's hard to measure the age of something as ancient as this - some scientists think the colony could be over one million years old. It weighs 6,615 tons, and it is the heaviest living organism on the planet.

Isn't the world fascinating? I also learned some really interesting things when researching the novella High Gravity. I'll tell you all about it when the re-write is done.