If you know me at all, you probably know I'm a big mush when it comes to animals. Seriously, I cry if they just look sad on TV. That's of course why there are so many dogs in this house. We used to have one, and now they're four. One is technically a foster, but considering Mikey can't sleep without her it's safe to assume we have four dogs. LOL.

Our little house is a bit strange. It has a big yard surrounded by a six feet privacy fence, but it doesn't have a back door. Two sides of the fence has neighbouring yards, but the third has a strip of no-man's-land before the next house. (It's for the electric company so they can care for the wires.) No one cares for the strip, and it's a mess,a little piece of jungle in the city. Wildlife loves it, and we've suspected for a while that some larger animal lives there. I think it's a fox, Mikey thinks it's a coyote. Either way, I'm not too worried about it.

Anyway, there are also many squirrels in the neighbourhood. They like the yard too. Besides the dogs, it's a fairly safe place. They run on top of the fence and tease the doggies. The boys don't care all that much, but the squirrels drive the girls bonkers. I bet in their imagination, the squirrels look like this: 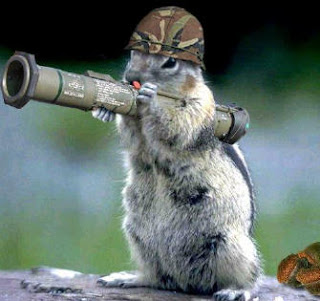 The other day, the dogs were much too interested in something under the orange tree. I told them to step back, and miraculously they obeyed. They all sat down and watched. To my horror, it was a half eaten squirrel. It was so gross and I felt so bad for it - only the back legs and tail remained. Eeeewww!!! It wasn't there earlier in the morning, I knew my dogs didn't do it, and it was a mystery. I took a shovel and hauled the poor remains over the fence. Maybe not my best idea ever, but I didn't know what to do. If I buried it, someone would just dig it up again. Then, one of the dogs discovered a big hole under the fence. Big enough for her to get through.

I hollered, "Stop it, get back here!" and again, miraculously, everyone obeyed and left the hole alone so I could fill it. My dogs must be better trained than I think they are, LOL. Later in the day, Mikey got some big stones and put along the edge, so whatever lives on the other side won't be able to dig through so easily. My theory was that something came under the fence, caught the squirrel, ate it, and left. =( At the moment I was a bit worried about said something still being out there when I come with the dogs - my Bonnie is a warrior princess and I don't want her to get into a fight with a wild animal.

This morning when we went outside, I scanned the yard for squirrels like I always do, didn't immediately see one, and took the leash off the first dog. I always let Bonnie go first. She took a few steps into the yard, and I saw something move in the orange tree. Damn!

I said, "Bonnie, stop." To my surprise, she obeyed, and stood there watching the little squirrel make its way across the yard toward the fence. It didn't run, which was probably a good thing. If something has the right size and moves with the right speed dogs will chase it. They can't help themselves, they will chase it. Squirrel moseyed across the yard, and I said, "Good girl Bonnie, you're a good girl, stay there. Just stay there."

The other dogs were going crazy on their leashes, of course, but Bonnie stayed and the squirrel reached the fence securely. When I let the gang lose they there was crazy patrolling and fence sniffing. Must have been frustrating to see another animal move on their turf and not be allowed to go get it.

I didn't think any more about it until I saw the little squirrel peek up behind the fence, looking between me and the orange tree. She didn't leave; she just kept looking at the orange tree. That's never happened before. I took a closer look at the tree, and it holds a little nest carefully padded with dog hair. Crap!

My new theory is that papa squirrel was killed when working on the nest. Mama squirrel is still working on it, probably pregnant and all alone. I don't know if they usually have babies at this time a year, but this is Florida where nature is always in full spin. I mean, this year the orange tree bloomed in April and November... If this is correct, how do I keep them safe? If this poor squirrel girl has babies in my yard, they're my responsibility and I'll have to find a way to make both the dogs and the monster on the other side of the fence leave her and her little ones alone. This will be a challenge. Maybe I can persuade Mikey to build a doggie fence around the tree, something the squirrels can get through but not the dogs... Maybe they'll understand. They're all such good dogs, but it's hard to overcome the instinct to chase stuff.
at December 10, 2012