I love Christmas decorations. They're glittery and almost magical, and taking the same things out year after year evokes all sorts of memories. Our tree contains decorations from when I was a little girl, some of unique stuff I bought when traveling, some cute old-fashioned objects Mikey bought for me, some decorations he made, and a surprising amount of toys and space ships. 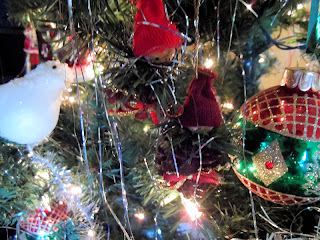 These cute little Santas are a great example. I got them from my aunt many years ago. She's gone now, but every year when I decorate the tree and take them out, I remember her. She meant a lot to me, and a part of her is still here, thanks to these little guys.

By now, you might wonder, did I really say toys and space ships? Yep. My first Christmas in the US - the first time Mikey and I decorated a tree together - he thought my stuff was old fashioned, and I thought his was peculiar. I wasn't mentally prepared for finding Marvin the Martian, Spiderman, and a Borg cube in the tree. The Borg cube not only lights up, it talks too, claiming resistance is futile. I'm a science fiction girl, but it took a while for me to understand what sort of business the Borg had in my tree, hahaha! 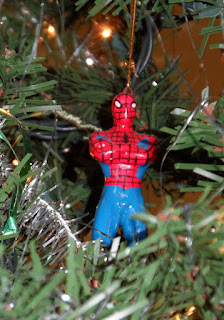 Now I know it's normal - Hallmark makes weirder Christmas stuff than I could ever have anticipated - but it was a cultural clash that one first time. Now I think it's awesome. I mean, I love spaceships and the tree wouldn't be the same without them. It just took a year or two for me to find them Christmasy. ;-) 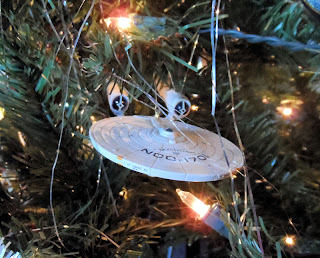 My husband is a collector, and he collects these little Star Trek ornaments. His birthday is early in December, and his sister used to buy one for him every year. I've taken over the tradition, making sure he doesn't miss anything cool. (Last year he got a Hallmark Cylon instead. It's a riot, it says all sorts of comical things.)

Anyway, this year I bought the ship, as usual, and stumbled over a picture of a Hallmark Santa Vader online. I thought, "Wow, that's kinda cool, but it has to be photoshopped. No one would turn Darth Vader into Santa Claus." 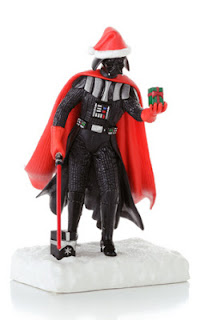 I checked the Hallmark website, and yes, there he was. Santa Vader... Mikey got two ornaments this year, I couldn't not buy Vader. Maybe he used Jedi mind control on me or something...

Vader is super-cool. He has a motion sensor, and speaks when something moves in front of him.

I wonder what they paid James Earl Jones to have him say things like:

"You will peek again, it is your destiny,"

"Your feelings for these presents are strong. Too strong, perhaps."

"Peek again and you will feel the full power of the dark side!"

"No peeking, there will be a substantial reward for you patience."

Between the two of us, we always get interesting decorations. If it was just me, everything would probably become too old fashioned. If it was just him, it'd be too over the top. Together we find a balance somewhere in between. =)