It's finally here; the re-write of the third Embarkment novella Adam and Eve is done. Here's a little sneak peek:


The woman stood very close to me all of a sudden, and ran her hands over my shoulders. “What’s with all this meaningless lull in here, Alex? What would an android want with paintings and pottery?”

Considering how empty the rooms were before Adam met me, probably nothing. “I don’t know, but he seems happy.”

I tried to shrug her hands off, but they were glued to my shoulders.

She shook me. “I know he’s not as proud of his heritage as he should be, there’s some small programming flaw there, but it can and will be corrected.”

I knew Adam had a sister, but I never imagined having to face her.

“Aren’t you a clever little sack of meat?”

She hardly finished the sentence before she grabbed me by the neck and banged me against the wall. “How dare you, human?” 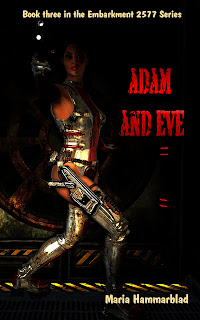 In this third novella in the "Embarkment 2577" series, Alex thinks nothing more could possibly stand between her and the peaceful and secluded life she covets. There aren't any aliens standing in line to meet her, no vengeful humans sneaking up on her, and no black holes anywhere in sight. She has found a home and a family, and nothing more could possibly go wrong. Right?

All she has to do before curling up in the sofa is to escort an unexpected visitor to the guest quarters until the Captain has the time to meet the newcomer. Should be a walk in the park...
at January 18, 2013