Casting the character... Patricia in Kidnapped

I've seen many blogs and Facebook pages where authors cast the characters of their books. That is, put together a dream cast of actors if the book was turned into an imaginary film. I always get stuck. I know exactly who represents one or two of the people in the book, but beyond that, I'm stumped. 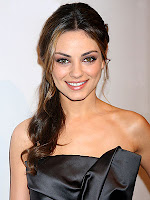 Take Kidnapped, for instance. When I wrote the dialogue, I heard Mila Kunis's voice in my head for Patricia's lines. Patricia in my head looks a little different from Mila Kunis, but in a dream cast, it would absolutely be her.

Picking her might sound like jumping on the bandwagon, but to my defense I'd only seen her in that 70's show when I wrote the first draft.

Travis? No clue. I know exactly what he looks like and how he talks in my head. Casting him? Why don't I go over here and potter about with some project while you come up with some ideas? =)

By the way, did I mention Kidnapped will be available as paperback soon? I don't have the exact date yet, but some time in February. I am excited!