My online friend Jinxie Gervaiso is running a free book event right now! I'll give the rudder over, so the author can tell you all about it.

Hey there Sinners and Saints,

You can get the first two books in the Prophecy series for FREE this week and this week ONLY.
Read about them below.


The Dracove – Book I of the Prophecy series 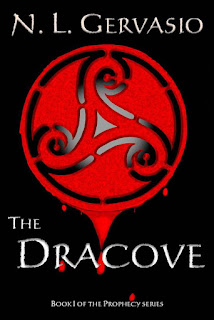 Kylie O’Rourke has unwittingly walked into the path of two vampyres—one who wants to use her as a sacrifice, and one who only wishes to win her heart. As she is pulled into their clandestine world, she learns more about her history and the reason behind her horrible nightmares.

Master vampyre Cianán searches for the one woman who could take his immortality to the next level—godhood. But, when he finds his Chosen One, his progeny Grantlund stumbles onto the Master’s plan... again. As if losing his first sacrifice to the bastard wasn’t enough, the Fates were to torment him with a second time. 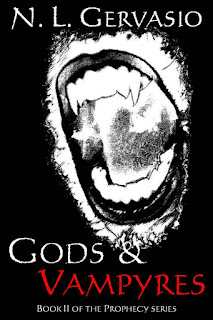 The act never changes, only its players over thousands of years.

When Kylie is taken for use as a sacrifice in an ancient ritual, Grantlund races to save her life, but he has to wait for that perfect moment or all will be lost. Not only does he have to go up against his former Master, Cianán, one of the oldest and most powerful vampyres on Earth, but now the gods are involved, and Cianán has a very prominent one in his corner.

Grant will do anything to stop Cianán from destroying his lover and this world, but what price is he willing to pay? Death at the hands of the woman he loves?

An epic battle is about to begin, and not even the gods know who will come out the victor.


This promotion starts on Tuesday night/Wednesday morning at midnight PST, so be sure to bookmark the event or write it down. And share, share, share, folks! Word of mouth is an author’s best advertising!

I’ll work hard to get the next Prophecy series book out — Gemini – Book III of the Prophecy series. It needs a lot of editing too, and perhaps some dissection where a novella may appear out of it.

As always, I appreciate you stopping by and reading.

NL “Jinxie” Gervasio is a creator and destroyer of worlds. She’s both editor and author, and discovered she’s quite good at the romance thing—writing it, that is—along with vampires, werewolves, zombies, angels and demons.


Jinxie is the CEO and Founder of Just Ink Press, her second publishing company, and she also owns and operates Forever Nocturne e-zine, a bi-annual literary magazine. Jinxie reviews books in her spare time, of which she rarely has any.


Jinxie was born on Friday the 13th. Her dad wanted to call her Jinx. Her mom said no. It took 34 years for her to discover the nickname, and she's grown quite attached to it. She lives in Tempe, Arizona with Umi (her mother), whom she cares for. She enjoys riding her beach cruiser "The Betty" around downtown Tempe, loves a good pub crawl, and has had the pleasure and the heartache of experiencing a love far greater than she could have ever imagined.


She welcomes you to her worlds.