I'm out of sync

I have a holiday problem. This has been my fifth Christmas in the US -- holy moly time flies -- and I'm still not synced with the American holiday traditions.

Problems start right after Thanksgiving when everyone else puts up lights on their houses and my husband starts talking about the Christmas tree. In my head and heart you put up a little something four weeks before Christmas, but everything major remains packed up until December 23rd. On December 23rd, or possibly 22nd, you go crazy with decorating.

We have reached a compromise with decorations going up; they come up mid December.

The big problem starts after New Years. Since January 1st, we are the only house on the street with lights and decorations still up. It's a long street. It just becomes so dark and sad when you take everything down, and I don't want to! 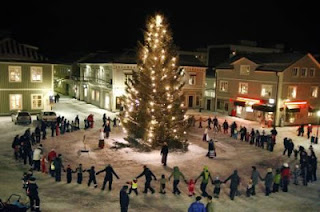 In Sweden, we think Christmas lasts until January 13th. On that day, we throw parties for the kids with candy and "fish-ponds" where they'll get some little toys or surprises. If you do it the traditional way, there should also be music and dances.

The image isn't from my home town, but it could have been. (Most people do it indoors. Outside is friggin' cold...)

If you leave your stuff up far beyond January 13th, people might start raising eyebrows, but I know some who keep everything up until February. Seriously: it's dark. We need that extra light and cheer.

Should I conform and accept the holiday is over? Or should I stay stubborn and let us remain a source of gossip for all the neighbors? I haven't quite made up my mind...
at January 03, 2013