Once upon a time, in the distant past we now call the 1990’s, I read “The Road to Omaha” by Robert Ludlum. It’s a funny book, with a hilarious foreword. He talks about the writing process going wrong and the writer giggling while working on what should be a nail-biting thriller. At the time I thought it was funny, but didn’t really get it. It would take me over twenty years to get it. 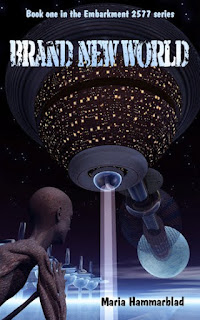 BrandNew World is the first novella in my series Embarkment 2577. When I wrote the first page, it happened. I giggled. I set out to write a serious science fiction romance about a girl transported to the future after a horrific accident. For better and for worse, my mind ran astray. The result is a scifi romance balancing on the edge of being a spoof.  Some people like it, and others think it’s the worst piece of crap ever written. I’m personally quite fond of it. =D The following novellas – High Gravity, and Adam and Eve – are more serious. I guess my subconscious had settled down a bit when I got that far.

So, what happens on that first page? The heroine wakes up in a foreign environment where everything is just a little wrong.  She hears voices, and I wanted her to meet a couple of the secondary characters right away, so she’d have someone to build rapport with. My mind pulled up an image of a magnificent cat woman. Beautiful, but strange, scary, and with the temper of a feline.

I wanted to throw another wrench in the mind of my poor heroine. One that would make her absolutely certain the world in which she woke can’t be real. Enter the rock star, or rather, a hologram of one.

I’ve always been fascinated with the idea of parallel dimensions. I don’t know if you’re familiar with the concept, but the main notion is that we might live many different lives at the same time, as different people. Some think every major choice every individual makes creates a new world, so there’s one for every possible outcome. Mindboggling idea, isn’t it? In this world, I’m me. In another I might be a housewife with seven children, and in yet another I might be a contract killer. Depending on who theorizes about it, the worlds are more or less similar. One popular theory is that dimensions very close to each other are more similar, and the farther you get from your own, the bigger the differences. My mind adores ideas like this.

Anyway, in my series “The Goddess’s Saga” the main character is a several thousand year old deity who modeled her appearance on a rock star. In my head, it was always Amy Lee from Evanescence.  If you ever read those books, she's the heroine.

I'm re-writing the Goddess books, by the way, so if you haven't read them, wait a little. They will resurface in new and improved shape in not too long.

Anyway, I thought, “Wouldn’t it be interesting if she was someone else in another dimension? Someone who looked like her and thought like her, but worked within a completely different set of parameters? She’d need a different name, of course…”

Done, and done. If I brought Ms. Callaway over from the Goddess’s Saga I’d have to bring over her boyfriend as well: leaving her there all alone would be mean. He didn’t change as much; the drunken space rogue became a drunken pirate.

My mind wasn’t done yet. The heroine (of Embarkment) needed a love interest. Making it a human would be much too easy on her. She would be in love with… *eyes wandering over my desk; paper clip, pen, computer, paper, computer* aaah, the ship’s android life form.

Just pairing her with the android still seemed too easy. "She can’t remember anything, because she has amnesia after dying and going to the future. Eureka!"

Are you confused yet? My head is a pretty random and messy place, where all this makes perfect sense. I think it comes together pretty nicely in the book, though.

Below is a brief excerpt when my heroine Alexandra first meets these strange ladies. After this encounter she’s quite convinced she’s had a mental breakdown and really sits comfortably in a padded cell dressed in a shirt with very long sleeves.


Doctor Ima pressed a paw against my forehead. Her palm was soft and lined with fine hairs.

“Please don’t be angry with Adam, he saw no other way than to bring you along. You were quite dead you know.”

Who? What? I didn’t have time to voice any questions; the first voice I heard sounded again from further into the room. “She’s not angry with Adam. I detect quite fond feelings for him.”

This time my mouth moved when I wanted to speak, and my voice came out much stronger and steadier than I expected.  “How can I have fond feelings for someone I don’t know? Where am I? What is this place? What do you mean I was dead?”

When this woman came into view, I was certain I hallucinated. Her cold blue eyes, scrutinizing me from a beautiful face surrounded by long dark hair, were much too familiar. It was the face of a well-known rock star, and I had seen her in concert just a few months earlier. I managed to sound accusing. “You’re Amy Lee. What are you and cat woman doing in my dream?”

The face smiled and answered in a voice just like the one on the CDs I used to play in my car. “I’m not Amy Lee. I’m Doctor Anya Benton, ship’s counsellor. How do you feel?
at January 25, 2013