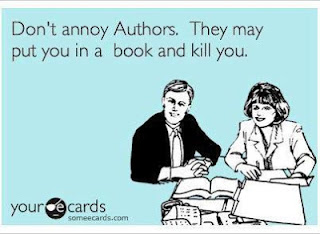 When I have the time, I like to put up goofy stuff on my Facebook page. Like this picture... There are also aprons, T-shirts, bumper stickers, and stuff I can't even remember with the same base message.

I sometimes put real people in books, but I rarely kill them. In Undercover, most of the secondary characters are based on real people, but these are mostly people I like. This could be a game: If you read the book, try to figure out which character is based on a real life person I don't like. LOL!

Anyway, I digress. When I encounter really annoying people, they tend to become nuisances or flat out bad guys in my novels. I have a great example in Flashback (will be released in June by Desert Breeze Publishing). The heroine has some extremely irritating upstairs neighbours. They're my old neighbours, and the reason we're now renting a house instead of an apartment. Actually, I've made them better in the book than they were in real life.

I have a dilemma with my current work in process. The hero is a cop who has worked undercover in a criminal motorcycle gang for two years. He's pretty good at his job, and I need someone to tattle on him for them to discover him. I have the perfect victim for the role. This real life person does something - in real life - that would make headbutting with the hero inevitable, but it's also so characteristic no one who knows her would be able to not see it's her.

For making it work in the novel, I'd have to make her into a pretty unpleasant person. She's actually kinda nice and doesn't deserve that. (No, it's not someone close to me - you're all safe, LOL!) On the other hand... what are the odds she'll ever see it? I guess it comes down to, just how nice or bad a person am I? We'll see, as work progresses, mwuahahaha!
at January 09, 2013