Today, I have a special treat! A guest blog by scifi romance writer Greta van der Rol who just released her seventh book! An impressive number from an author well worth putting on the TBR pile! 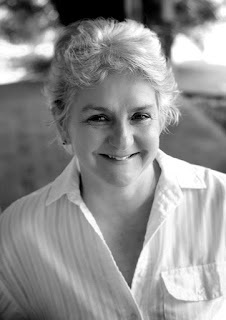 Hi, Maria, thanks so much for having me on your blog.

For the benefit of your readers, I mainly write science fiction with a scoop of romance on the side. I've just finished my seventh novel, Morgan's Return, which is a sequel to Morgan's Choice. I find it interesting that Morgan's Choice has proved to be the most popular of my books, given the way it was originally started.

A few years ago, when I decided it was time to begin work on my first masterpiece, I had a few notions set in stone. The hero was going to be an admiral. They say you shouldn't use senior ranks for your hero, because in real life, admirals, generals and so on are older guys who don't actually do much more than give orders. Never mind, I'd get around that. And the heroine was going to be a computer expert, geeky type. So I started writing. And after a few weeks I threw the whole thing at a virtual wall and snarled, "what a load of rubbish. Who's going to want to read that?"

Not long after that I watched a TV program speculating on possibilities for future missions into space. The talk was about generation ships, maybe using humans specially modified to use less oxygen, less water and so on. Maybe people would have implants to expand their capabilities. The germ of an idea took root; in fact, a couple of ideas. Morgan Selwood began to take shape, and so did the predicament in which she would ultimately find herself. So I started a second book, which turned out to be Morgan's Choice. Morgan is a cyborg, in as much as she has had her capabilities enhanced. But she's nothing like the Terminator and such. She's very much a woman, strong, feisty, calls a spade a fuckin' shovel and she has zip, zero, no respect for anyone just because they have a military rank and a bunch of fruit on their shoulder boards.

Morgan has proved so popular, that I wrote two short stories about her (Supertech and A Victory Celebration) and now I've finally written a new novel, Morgan's Return. 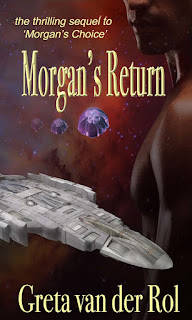 When you delve into ancient history you never know what strange forces you might unleash.


When Morgan Selwood and Admiral Ashkar Ravindra travel to Morgan's Human Coalition to learn more about the origin of Ravindra's people, their relationship is soon sorely tested. Morgan is amongst her own people and Ravindra is overprotective and insecure, afraid of losing her.  But not everyone is keen to welcome Morgan home, not when they'd gone to all that trouble to get rid of her in the first place. Soon Morgan and Ravindra have a rogue Supertech on their trail with only one goal – kill Selwood.

Together, Morgan and Ravindra follow a tenuous trail back into humanity's past, to  the time historians call the Conflagration.  But what begins as an innocent archaeological investigation escalates into a deadly peril for both humans and Manesai when Morgan and Ravindra are thrust into the middle of an unexpected conflict. And that rogue Supertech's still out there, itching for revenge.

And here's a short excerpt:

Prasad, Morgan and Ravindra have been to a cathedral, looking for clues. Morgan was unimpressed.

"Silly bitch. She thinks Supertechs are a danger? Huh."

"You could be, without some control," Ravindra said.

"Huh. And what about that stupid war machine? What sort of idiot would make a weapon as inefficient as a human body? Can't fly, can't turn, can't do any damned thing worth doing."

Chuckling, Ravindra released her. "Yes, my dear, you're right. So… what now?"

"That was a crashing waste of time, wasn't it?" They passed through the crumbling archway back into the street. "Now? We get off this dump of a world and…" Morgan sidestepped to avoid a uniformed woman on the footpath, "…sorry. Then we head for Torreno. There's sure to be some clues in the central library."

Ellen watched them as they entered an autocab, which disappeared into the heavy air.

Bloody Selwood. She'd walked around her, said sorry. Ellen had worried for a moment, that she would be recognized, that Selwood would detect her as another Supertech. She should have known better. Nobody ever recognized her, especially not the famous Morgan Selwood. Ellen had just been another junior Supertech, hovering around the edges of whatever it was Selwood did, easily ignored, easily overlooked.

The man she was with, though. It had been worth the risk, just to get a better look at him. What a man. He was even more impressive in the flesh, with a beautiful, deep voice, smooth as dark chocolate.The other man was no slouch, either, lithe and graceful as a dancer. She hadn't understood the language they spoke, but Selwood had said 'Torreno'.


Look for Morgan's Return on Amazon and Smashwords It will filter through to other sites in due course, and yes, there will be a print version.

Greta van der Rol loves writing fast-paced, action-packed science fiction with a large dollop of good old, healthy romance. Her novel Morgan's Choice was in the top 100 best sellers for space opera on Amazon for several months. But she writes other genres, too. Her historical novel To Die a Dry Death was awarded the bronze medal for historical fiction in the 2011 eLit Awards and her latest work, Black Tiger, is a paranormal romance. Greta lives not far from the coast in Queensland, Australia and enjoys photography and cooking when she isn't bent over the computer. She has a degree in history and a background in building information systems, both of which go a long way toward helping her in her writing endeavours.