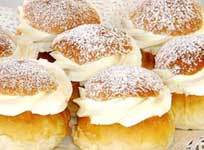 At this time a year - usually starting some time in February and leading up to Easter - Swedish people eat semlor. (One semla, many semlor.) It's traditionally a Tuesday thing. If it's Tuesday, you're supposed to have a semla.

We put heart and soul into the tradition, and there are contests in both eating and baking semlor.

So, what is it? It's a wheat bun (some modern semlor have saffron in the buns) filled with marzipan or almond paste and whipped cream. It's supposed to have some confectionary sugar dusted on the "hat."

Traditionally it's eaten soaked in warm milk, but nowadays most people just grab it and munch down.

As you might guess, I have a semmel-craving. Unfortunately, one can't just buy them here in the US, and just finding the ingredients can be a challenge. I'm pretty bad at baking them too. My travels around the Internet brought me to a new recipe, and if I get the time this week, I just might try it. It's even in American measurements! Check out this link 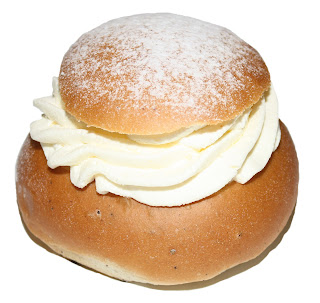