When the characters take over 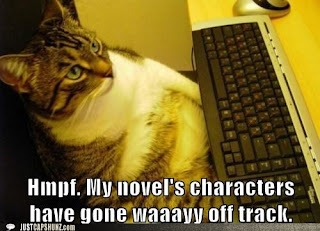 I usually start my writing projects filled with purpose. I type away at the first chapter, might even get through the second, and then I write an inspired ending. This is where things get a little confusing. I think I know what happens in the middle, but the characters usually don't agree.

Sometimes they just come up with ideas about what happens to them. They know better than I do, so whatever little incidents they want to talk about usually work just fine. Sometimes they argue. Some are really difficult, claiming they loath the person I intended for them to hook up with. That one's tricky, because all of a sudden an intended main character isn't a main character at all.

I've been working on a novella scheduled for release in November. I'm intending for one of the characters to die, but he doesn't want to. I might kill him anyway, to show the imaginary people in my head who is boss, or it might make for a completely different ending than I originally intended. That doesn't have to be a bad thing; might make everything more interesting. We'll see...
at March 31, 2013