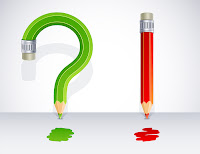 Luckily, my teacher took her job more seriously than I did, and drummed some basic rules into the heads of her students. I'm not saying I always do it right - I tend to sprinkle in many more commas than most people would find appropriate - but I have the advantage of knowing that there are rules.


The first rule is easy.


If you see an -ing word, look out for a comma.

Some sentences with -ing words are too short for a comma, of course. Like... "I should be writing."

In a longer sentence with an -ing word, there should be a comma.

Examples:
"When signing up for the class, Maria thought she'd have to re-work her schedule."
"I ran towards the fire, waving my arms in the air."

The comma isn't always right by the -ing word, but it's there.


The second rule will probably stick in my head well after I grow old and forget my own name. 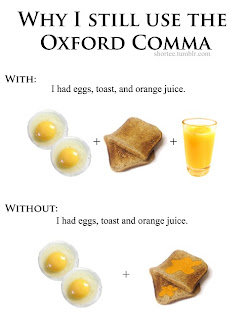 The rules about "and" are:


The third rule is about subordinating conjunctions.


The what and the what? A subordinating conjunction is a word that connects a main clause to a subordinate clause. Oh, don't look so scared, it's not as complicated as it sounds. These are words like:

There are more of them, but once you get the feeling for it, you don't really have to think about it any more.

Example: "Maria wrote the blog about commas, because she was so tired of people skipping them."
The word "because" ties the two parts of the sentence together. Note that the comma goes before the word because, not after it.


Use a comma with parenthetical elements.

What does that mean? Easy. "Maria's cell phone, which she mostly uses to check her e-mail, fell to the floor."


Besides these basic rules, commas are used to avoid confusion.

Another good example that has been going around the Internet is:
"Let's eat Grandma."
"Let's eat, Grandma."

I am concerned about my country

Don't get me wrong - at a time like this it's prudent to be concerned for the whole world, but Sweden and our scientists seem to hav...