It is time for a new issue of the SFR Brigade presents. Today, I'm presenting a snippet from my free read Courage and Retribution. Click here to check out excerpts from more science fiction romance authors!

Courage and Retribution is a short free read accompanying my novel Kidnapped. It's a prequel telling the story of some of the side characters and how they got together.


William lived in a world of uneasy dreams. His people were screaming, dying, being burned alive, and he needed to pull free from whatever held him so he could rescue them, but invisible forces kept him back. The dreams faded into merciful darkness.

William opened his eyes again and struggled to sit up, even though the room revolved around him. Everything bathed in a light so bright it shot bolts of pain through his skull, but when he squinted and shaded his eyes with his hand, he could make out four bare metal walls and a metal ceiling. The cell didn't even have a visible door. "Where am I? Who are you?"

Aaren chuckled. "Of course there are more prisoners here. This is a prisoner ship, and it's what they do. So, what'd you do that's so bad they let you live?" 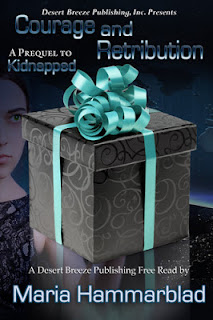 On the outskirts of the ever present Alliance's watchful eye, William Reynolds has served as mayor and preacher for the better part of a decade. Life is good, and he sees no reason to change anything. When a family fleeing the Alliance's oppression comes his way, he still doesn't hesitate to hide them.

Reaching out to the people in need proves to be more dangerous than he could ever have anticipated, and once events are set in motion, there is no going back.
at April 26, 2013