I've been at the BlogPaws conference in Washington, and returned home last night. It's been a good conference and a good trip, but coming home was awesome! 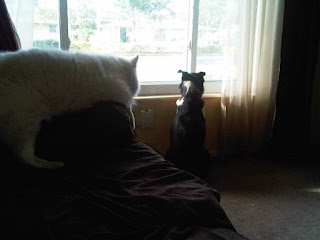 I think I spent two hours last night being glomped and kissed by the doggies, and giving tummy rubs. They thought I was never ever, ever, coming home again. I usually don't go anywhere without them, and traveling without my furbabies and dear hubby was a bit weird.

Mikey says Topper held out hope the longest. He kept staring out the window, waiting for me long after the others gave up. He's my baby boy!

I brought a big bag of treats for them. They might not care, but it soothes my bad conscience for leaving them.

It was a great conference. I suspect I'll be talking about it and all the awesome people and pets I met for a few days. One of the highlights was meeting Dino Dogan - the founder of Triberr. Such a pleasant and friendly person!

My friend Maya took me sightseeing in Washington. The Lincoln memorial was much larger than I expected.

The White House, on the other hand, was smaller than I thought it would be. It's a big house, but I expected something even larger, probably because it looks so huge in all movies. 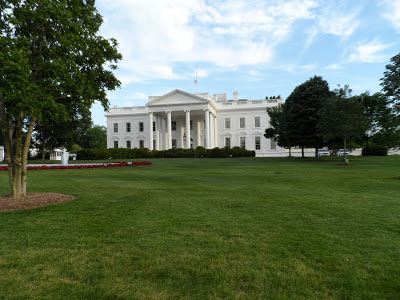 There were guards everywhere, and they were shutting off the street for some event. Of course, we managed to be on the wrong side of the blockade, and trotted down the road trying to look like we belonged. The secret service kept their eyes on us, but no one said anything.

One guard stood on a lawn clearly attempting to look inconspicuous with a black bag in his hands. Fail:  the handle of an assault rifle stuck out of the bag clear to see. I sort of wanted to wave to him just to see what he'd do, but I didn't. It was clearly a time for good behaviour.

There were all sorts of cool animals at the conference. I wish I could have brought one of my doggies, but they wouldn't handle an environment like that too well. There are so many people, weird sounds, and so many other animals I think it would have been a disaster. Maybe Topper could have come if I had been a visitor, but not when working. 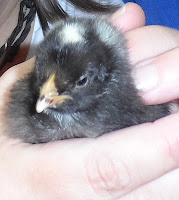 One exhibit had baby chickens. One of them fell asleep in my hands. I sort of wanted to bring them home, but they weren't allowed aboard airplanes, so they couldn't go to Florida. I sort of knew that chickens are flock animals, but I didn't realize that you're supposed to have at least three. They need company from each other, and like to cuddle up together.

We met the cutest ferret named Snotface. I have photos of him, but they're in my phone so I'll come back to him in a later blogpost. There were also a lot of cool cats and dogs, of course, and the biggest bunny rabbit I've seen in my life. At 34 pounds he weighs as much as my dog Topper. It's hard to imagine a rabbit that size, so here he is with Maya. That's a big rabbit!

Petfinder had a booth, and I made a friend in Moses, an adorable mixed breed dog with an "adopt me" vest. I wanted to take him home, but that wouldn't have been a hit with hubby and the other dogs. He was a real cutie, though, and extremely well behaved. For a little while, he curled up on my lap and took a nap. I hope he gets a wonderful home of his own.


At a conference like this, where there are animals everywhere, one get to see some unexpected things too. I don't usually take photos in the ladies' room, but I couldn't resist this. 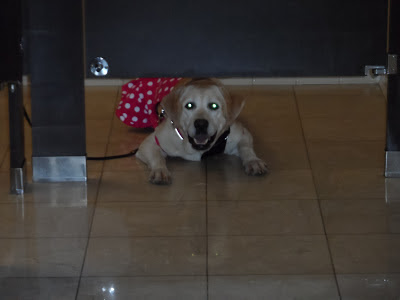 I was at BlogPaws with my daytime job at PlexiDor Pet Doors. We had a giveaway, and this became one of my fondest memories from the conference, because the woman who won was so happy. She has  great Danes, and will get an extra large door for wall mounting. It's a good prize; it's a great pet door. Her enthusiasm made my day!

Here's our winner, Marie, with Maya and Robert at the booth.


The adventures didn't quite stop even on the flight home. The plane we were originally on was cancelled, and we had to leave hours earlier than expected. Having to break booth in the middle of the conference could have been really bad, but everyone was understanding.

We didn't think we were all that late to the airport, but sort of forgot that we were flying out of Washington DC. Security was fierce. Maya dropped Robert and me off at the airport and went to return the rental car since we had luggage to check and we all estimated that it would take longer for us than for her. By the time we were through security, we realized she wouldn't make it, and she didn't. She came to check in with one minute to spare, and they told her she wouldn't make the flight. Seeing things from the bright side; if any of us were to be left behind it's a good thing it was her, because she has friends everywhere and is less lost than I would be. I mean, I'd grumble, attempt to find another flight, and probably end up in a hotel room mad as hell. She turns things into something positive. I think she called a friend and ended up going out for dinner with some of the bloggers from the conference. It was still weird to leave without her.

We had a layover in Atlanta, and the flight was late. Peculiar airport. The restrooms were like a mile away from the gate. Anyway, since our flight schedule was all messed up I think they squeezed Robert and me into the very last seats available. We ended up at the very back of the plane, and I sat next to a lovely gentleman who talked about when he first came to Florida in 1970. When he heard I'm Swedish, he told me about traveling in Europe in the 1950's. He had some fascinating stories.

A couple of rows in front of me sat an old woman, and I saw her struggle to get up of her seat. It's not that easy when the seats are narrow and an unyielding armrest is in the way. No one went to help her, not even when she attempted to fold out the tray table and lean on it, so I unbuckled my belt and went over to offer my hand. She made her way to the restroom, and the man next to me asked if I knew her. I said, "No. I just saw her having problems getting up and I felt bad for her." He asked several times if I was sure I didn't know her. I thought, "I'm Swedish, my mom raised me to help people when they need it, and one day it could be me sitting there unable to get to my feet."

When the plane landed, I rose up and was happy to stand in the aisle for a few minutes. The woman turned to me and said something - in German. I understand German fairly well on a good day, but at this point my mind was completely overloaded. I recognized the language, but that was it. She said it again, and I shook life into my last remaining braincell, managing to answer, "Ich spreche sehr schlecht Deutsch." (It means "I'm very bad at German.")

My words came out slowly and probably with a horrendous accent, but her face lit up with a smile, and she said, "That's okay, we can speak English instead."

She thanked me for helping her, and told me she had been sitting for over sixteen hours as they flew in from Munich. That's a long journey. After flying and sitting in airports for that long, I don't think my legs would be happy to carry me either! She was on vacation with her family, and wanted to re-visit places where she grew up, and wanted to visit her mother's grave in Sarasota. Such a wonderful story, and wonderful people. I would never have spoken to her if I hadn't gotten out of my seat, and I'm happy I did.

Rounding off the conference talk for today, here's a photo of one of the cutest dogs I've ever seen! I had the opportunity to hold him, and he weighs like nothing. I want one, LOL. 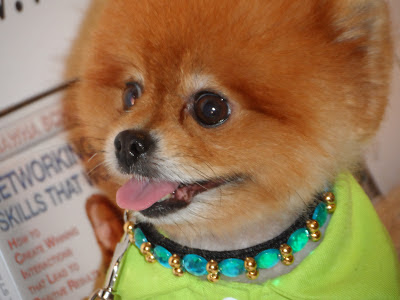