Operation Earth is proceeding according to schedule.

Yes, as any well-plotted invasion should, Operation Earth is keeping its time table. It is a scifi romance, and hopefully I'll be able to share the cover soon. Since time moves faster and faster the older I get, the release date in August should be here in about a week... 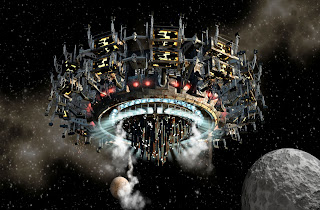 My editor is both excellent and funny. We had a comical discussion about what the grouping of aliens come to invade us might be called. Like, "You're now a part of the... something something."

Picking a word for the "something" isn't all that easy. Every expression I could think of was already used.

Star Trek has a Federation. Star Wars has an Empire and an Alliance. Firefly has an Alliance. Andromeda has a Commonwealth. I think both Babylon 5 and Battlestar Galactica have councils, but I might be mistaken. I think the Jaffa in Stargate are also run by a council.

To complicate things further, I use a Confederacy in the Embarkment books, an Alliance in Kidnapped, and the Borealis series have a Protectorate. Can't use any of those.


Luckily, editor's husband came to the rescue with a great idea. The Earth is invaded by the "United Galactic People's Republic." If you see a space ship marked UGPR you'd better take cover. They are here to assimilate us!