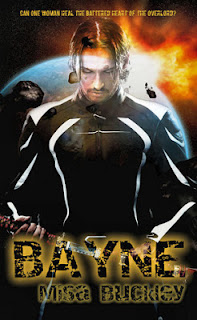 I recently read the scifi romance novella Bayne by Misa Buckley, and enjoyed it greatly. I gave it four stars out of five, and here is my review:

Malia's life could definitely be easier. Her parents are dead and she lives with an uncle who thinks women are only good for one thing: having babies. Whenever she can sneak away from her chores, she crosses into the "old town" and its ancient station filled with technology far out of reach for her people. She has been teaching herself to repair the panels and consoles, and is starved for more knowledge.

One day when Malia fiddles with the foreign devices, a space ship lands. It is Bayne, the Overlord, come to collect taxes far overdue. Malia panics; there is no way her people can pay, and Bayne didn't get the epithet "The Destroyer of Worlds" for nothing. She offers herself in exchange for the colony's safety, and is temporarily relieved when Bayne agrees.

Not until Malia finds herself in Bayne's quarters does she realize the impulse to sacrifice herself might be somewhat ill begotten. Bayne is as much machine as man and has a violent temper, and their relation is off to a rocky start. There might, however, be more to him than meets the eye.

I enjoyed the book and loved the characters Malia and Bayne. Their relationship is fascinating, and the story reveals interesting secrets and twists as it unfolds. I give it four stars instead of five because I would have liked to see some more "meat" on the bones. I would have loved to see more elaboration on the events, smoothing out transitions, and filling in the gaps. The book could have been twice as long with the same story arc without losing tempo.

Overall, Bayne is a great short read that contains mystery, danger, and sweet romance. The characters are well rounded and likeable, and I would love to read more about them in the future. I will definitely keep my eyes open for more books from Misa Buckley.