I used to read several books every day. A really thick one might have lasted me two days, but I went through regular size novels like other people eat potato chips.

Somewhere along the way this changed. My interest in reading didn't vanish overnight, but the quality of the books that came my way plunged. I must have started hundreds of books and given up after a few pages.

Every now and then an exception to the rule pops up. You know; one of those books it's a pleasure to read. Well written in active voice with believable characters living out an interesting storyline, no head hopping, no bouncing between first and third person, no unpredictable changes between past and present time... A good book!

I downloaded the sample of Copperback and enjoyed myself so much I bought the full download from Amazon and read most of the book in one night. I would have finished it if it hadn't been an early morning workday.


Check out the blurb: 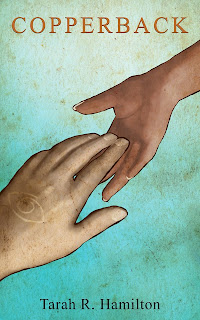 When do you learn to let go of your fears and misconceptions and trust what your heart is telling you? That real love can come in any form, even if he’s not human.

Two warring alien races are stranded on Earth due to the sudden destruction of their home planets. The Vesper, willing to help the human race to resolve most global crises, is accepted into society while the Sayner, refusing to cooperate at every turn, is enslaved.

Ten years later, Emily O’Neil yearns to find a way out of her small town life, continuing an existence of solitude since the passing of her mother years before. Her opportunity comes in an unusual way — a Sayner slave named Job who is on the brink of death and forced into her care. As their forbidden friendship develops, Emily finds that sometimes, fate has a way of making us see what we long for most — love.


Here is my review:

How would humanity react if large groups of aliens appeared among us? And, what if there were two groups of them - one seemingly cooperative and friendly and the other more… Well, more like us?

In Copperback we don't waste any time in siding with one faction and slamming the other into slavery. People are all too willing to buy into the idea of the Sayner as useful but dangerous animals, and the Vesper as near divine.

Emily O'Neil accepts the stories presented in media, and when she meets Job, a living and breathing Sayner, she's terrified of him. Life is rarely completely black or white, and when Emily is forced to spend time with Job she realizes there's more to him than she could ever have expected.

Copperback is an excellent book. It is well written and populated by characters that come across as real people. Their anguish, fears, hopes, and dreams seem real. The author kept taking turns I didn't expect; every time I thought some major obstacle would appear in the heroine's way nothing happened, and every time I expected smooth sailing, disaster waited around the corner. I thoroughly enjoyed it, and if you're looking for a light and pleasant read this might be exactly what you seek.
at August 31, 2013