Signing up for an author festival... or two...

The truth is sometimes hard to face: I need to get off my bum, go outside, and talk to people. It would be fantastic if I could live my life hiding behind a computer screen, but it doesn't really work like that. Don't get me wrong, I don't have a fear of public speaking or anything, I'm just lazy!

To shake myself out of lazy, I've decided to sign up for the Sarasota book fair. This event will take place October 5th at the Art Center in Sarasota. If you're in the area, come see me!

Signing up wasn't bad - I didn't even have to leave my chair - and I'm pondering signing up for a couple of more events.

There's a large book fair in St Petersburg October 26 called Festival of Reading. I attempted to be accepted as a featured author, but that ship sailed long ago. I'm not good enough at planning to wrap my head around a late October event requiring submissions early spring.

There's still time to buy a vendor package, but the booths are kind of expensive, and I need to see what might remain of my next paycheck before deciding. It's tempting, though. It's a big event within minutes from home, and it's only one day. If they still have spaces left in a week or so I'll probably sign up.

For the past couple of years I've wanted to do the Miami Book Fair. That idea makes my inner procrastinator dig her nails into the floor and scream, "Noooo!"

On the pro-side, it's a huge event. The website boasts "hundreds of thousands of visitors." I could get a one-day writer's booth for $300. It's a lot of money, but would also give a lot of exposure.

On the con-side, it's in Miami. According to MapQuest it would take me almost five hours to drive there. After that I'd need to set up my booth, have a full day of fair and drive five hours back. Or get a hotel. It wouldn't be bad if I could persuade hubby to come with me, but the chance of that is about as big as me waking up on Mars tomorrow morning. He'd say, "Have fun, hurry back."

I think Miami will have to wait until next year. I have promised myself to stop procrastinating and visit many large conferences next year, so I'll put Miami on the list. 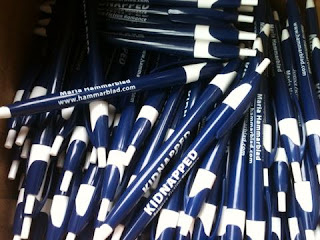 Now, there's quite a big step from deciding to do something to actually doing it.

I started a to-do list earlier today with stuff I will need for all these conferences I want to attend. Tablecloth, a table runner with my name, or maybe a banner with my books and my name, swag, books...

Should I have a giveaway?

Should I get that thingymabob that allows people to accept credit cards through the cell phone?

I'll need change if I am to sell books. How many books will I need to bring? I'll need new business cards, and new postcards to sign for the books that are still only available as e-books...

There's a large number of questions to be pondered. Help me out: what kind of swag do you wish writers would give out?
at August 29, 2013