Coming soon: Shadow of a Man

In a few weeks time it's my turn to release a novella in Desert Breeze Publishing's Borealis series. Mine is called Shadow of a Man and will be available October 11. I don't have the cover just yet, but I would like to share an excerpt!


Theresa pulled her feet up under her. The room probably wasn't cold, but she still had to suppress shivers.
"I wish we weren't going to Borealis."
"Trust me, you're not the only one."
Interesting.
Captain Geo rarely answered when she spoke, even if he was right next to her.
Sometimes she forgot what his voice sounded like.
Why is he standing guard inside the room anyway? He's usually on the other side of the door. Oh well, maybe he needs company too.
She turned to meet his eyes and lifted an eyebrow.
"Did something happen to you there?"
He stood right beside the door with his feet apart and his hands tucked behind his back, looking authoritative and unafraid.
"Something happens to everyone who sets foot there. You too.  Am I correct?"
This time all willpower in the world couldn't suppress the shudder. How could she be so fearful of a place she'd never seen? Telling herself Borealis was built and inhabited by humans didn't help one bit. She still considered it one of the lower levels of Tartarus where souls were tortured until the end of times.
"You know. You helped get him out."
He nodded, but didn't have time to answer; his radio crackled to life. She couldn't quite make out the mumbling voice on the other side, but it didn't matter.
It wasn't for her.
It was never for her.
"Ma'am."
Geo's voice right next to her made her jump. His chiseled face was almost within kissing distance. How could he be so quiet and still move so quickly?
"I need your assistance."
The mere words made her feel fatigued.
"Oh no. What did he do?"
"He's setting fires on the cargo deck, ma'am. Fire will deplete our air supply."
"Setting fire to what?"
"To Sovannary, ma'am." 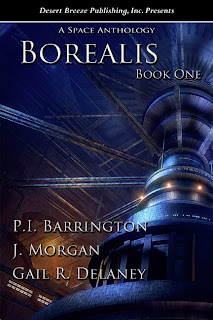 Borealis, A Space Anthology
Book One

In orbit over a deserted outpost at the edge of conquered space sits an aging space station under the control of the Trans Planetary Protectorate. The Borealis is slowly falling apart as the Protectorate funnels its massive resources into the border wars and keeping the outlaying systems in line, as insurrections break out.

As an Enforcement Officer of the TPP, it's Khai Zafara's job to transport Teyrnan Sajan, a rebel leader and 'prisoner of war' to the Borealis to serve out his sentence in the prison levels. Khai holds a deep-set hatred for the Rebellion, believing they were responsible for her father's murder – which she witnessed as a young girl.

Teyrnan Sajan was on Borealis they day Khai's father was murdered. He thought he was the only person left alive who knew the truth. Once Teyrnan realizes who Khai is, he begins a slow process of helping her separate reality from the false memories the TPP drilled into her head.

Teyrnan is a convincing man, and Khai begins to see the truth behind TPP lies. At first, she convinces herself that it's the draw she feels toward him that's clouding her judgment… but as memories break through, she has to accept the truth. And she has to make a choice: Deliver Teyrnan to Borealis so he can serve out his punishment -- and probably die -- in prison. Or, turn her back on the TPP and everything she thinks she's known to join him and the Rebellion and right the wrongs done by her father's murder

Kiss Me, Kate by J. Morgan

K'Tyln Dar is a pampered prince who wants to finally become the man his planet needs so he goes in search of the baddest bounty hunter in the known universe -- The Professor.

Richelle is called The Professor because she knows every possible way to kill a man. Most people -- like K'tyln -- have no idea that the most ruthless killer in the known universe is a woman. And she likes to keep it that way. Richelle has neither the time nor patience for a puff-shirt, golden boy politician like K'tyln Dar.

When he brazenly demands to meet The Professor and reveals his desire to 'learn to be a warrior', her first thought is to put him in his pompous place. But, as he takes his licks -- and bruises -- and contusions -- she sees a glimpse of the man he not only wants to be, but the man he is deep down inside.

Forgive Us Our Debts by Gail R. Delaney

Sarina Laroux is taken hostage and held as a prisoner on the Borealis, considered a traitor to the TPP after they took her father's throne and laid waste to Andromeda Prime -- her home. Theron Kess is sent by her family to rescue her, a job he would never refuse because he owes her family more than they even know.

Theron almost gives up hope in getting her out when he can't locate her amongst the other Uudon-dosed prisoners. When he finally finds her, he is thankful he always prepares for the worst, because her situation is the stuff of nightmares.

Add to that the fact that the Rebellion picks this time to attack the station. Not only does he have guards and Sarina herself to deal with, but gunfire and an aging station ready to shudder apart with the next pulse cannon blast. He has to earn Serina's trust -- something that doesn't come easy on the Borealis -- if he has any hope of getting her out alive. By the time all is said and done, they both come out different people... and for the better. 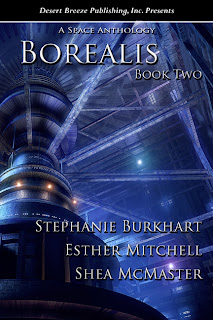 Shadows and Light by Stephanie Burkhart

Although used as a controlled -- and controlling -- substance in the Borealis prisons, Uudon is a powerfully addictive drug. Abuse runts rampant, and the violence that has been directly linked to Uudon use is staggering. Nowhere is this more true than on Borealis, where the poor and forgotten will do nearly anything for this drug that will take away the sharp edge of their pain and supposedly make life a little easier to live... until they need their next fix. If they can't get it, their hazed world turns into hell... and depending on their degree of addition -- death may follow.

Over the years, the Rebellion has successfully infiltrated every level of the TPP and has slowly been chipping away at their power from their very foundations. Elijah Kess has been aboard Borealis for nearly half a cycle, working as a lieutenant on the Enforcer squad, and gathering information.

So, when he starts suspecting someone is poking around about the Uudon trade on the ship, he has no idea that person has been sent by the Rebellion and his own family. Elijah and Persephone are both strong willed people, and both think they know the best way to handle things... as they trip over each other at every turn, they have to decide to either work together -- or shoot each other -- whichever comes first.

Libby ended up on the Borealis after her attempt to escape her brutal and domineering husband was thwarted by a freighter captain with ice-blue eyes and a dangerous energy. Desperate to find something better for her young daughter, Nala, she thought she was doing the right thing. Now, she's stuck in hell.

She works as a bar wench in one of the many bars on the station, but if she can't find another way to live, she may have to give in to the demands of Jake "Skins" Ruby and join his working girls. When Sam, the mysterious freighter captain from her past, rescues her from a bar brawl and offers to help rescue her daughter from her ex-husband's plots to use the girl to his own ends, Libby finds the 'something better' she always wanted. Purpose. Now, the three of them just need to get off the Borealis alive.

Commander Kal Raines began questioning the wisdom and guidance of the TPP when they exiled him to the Borealis. But, he's loyal if nothing else. Since then, he's questioned every choice he's made in the name of the TPP. Summer Merriweather has worked for the Rebellion under many names and in many situations, and now she's on Borealis. When Summer crosses his path, she brings even more choices into question and Kal sees his loyalties have been thrown to the feet of swine. When he realizes he has the chance to help in the ultimate overthrow of the TPP he stands and the precipice and must either step back or jump. Step back, and let the Rebellion die. Jump, and join Summer in an ongoing, stealthy battle to strengthen the rebellion and perhaps someday overthrow the TPP. 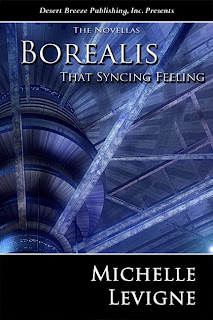 On the other side of a space anomaly, Rover Pilot Nureen Keala came face-to-face with her childhood hero. Problem: Creed died fifty years ago in a devastating space battle. Telepathically linked with a shapeshifting creature named Tessur, Nureen had to get her scout craft repaired and get off the Borealis, but she wasn't sure who she could trust. Certainly not this Tedrin Creed look-alike, and maybe not even Tessur. Forget the TPP.

Tedrin Creed had been stuck on the Borealis five years, after falling through the space anomaly during a massive battle. He doubted Nureen's claim to be a Rover -- the uniform and technology were totally wrong. Problem: she sure reminded him of his best friend, "Killer" Keala. Bigger problem: the anomaly was closing, time was running out, and he had to convince someone he didn't quite trust to escape with him now -- or never. 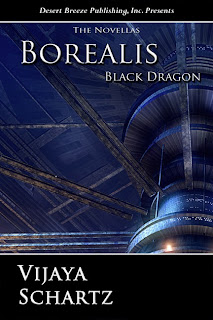 A dandy is cheating in a gambling den of the Borealis space station, and Lieutenant Zara Frankel intends to catch him in the act. She always gets her man, but this one could prove more than she can handle.

Captain Czerno Drake, code name Black Dragon, intends to break his innocent uncle from the most secure penitentiary in the galaxy, on the Borealis space station. He will stop at nothing to succeed, even enrolling the help of the lovely straight arrow TPP enforcer. When Zara realizes that she’s been used by a shrewd but seductive rebel, however, her reaction surprises everyone, most of all herself. 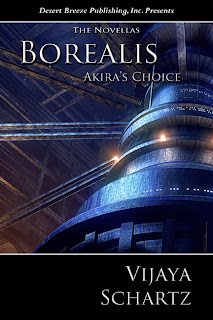 When bounty hunter Akira Karyudo accepted her assignment, something didn't add up. Why would the TPP want a kidnapped orphan dead or alive? She will get to the truth once she finds the boy, and the no good SOB who snatched him from a psychiatric hospital. With her cheetah, Freckles, a genetically enhanced feline retriever, Akira sets out to flush them out of the bowels of the BOREALIS space station. But when she finds her fugitives, the kidnapper is not what she expects.

Markku, a decorated rebel soldier, stole his nephew from the authorities, who performed painful experiments on the boy. Stuck on Borealis, he protects the child, but how can he shield him from the horribly dangerous conditions in the lawless sublevels of the decrepit space station? Akira faces the worst moral dilemma of her career. Law or justice, duty or love. She can't have it both ways.

Akira faces the worst moral dilemma of her career. Law or justice, duty or love. She can't have it both ways.
at September 03, 2013