Imagine a world where snippets of lore come true - in a dark way. It's not fairy-tale land, because there aren't any fairy godmothers or cheerful little dwarves rescuing princesses. It's story-land, with the stuff people talk about around campfires to scare each other before sleeping in the wild.

In Napier's world creatures out of mythology, books, and movies come alive, bringing out both the best and the worst in surviving humans.

This book is unlike everything I've ever read before. The first part is a series of suspenseful stories, and at first the timeline confused me. Then I decided it didn't matter, and went along for the ride. And what a ride it is!

Is it good? Let me put it this way. I didn't intend to read a book today, and I attempted to put it down several times. Each time, I went to the kitchen for another cup of coffee, and returned to the book. I HAD to see what would happen, and who would survive.

The book is well written, superbly edited, scary, gripping, and intense. If you're the kind of person who wants to hide under the bed at the mere thought of something supernatural, it might not be for you. Me, I read it on Kindle and as soon as I finish writing this review I'll go see if it's available as paperback so I can keep it forever. 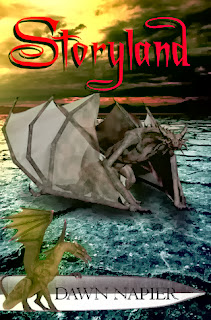 Storyland is a unique vision of the urban apocalypse novel. Creatures of fantasy and nightmare have returned to the real world, and human beings are now an endangered species. Fairytale monsters have come to life, and the lessons they teach are grim.

Out of the ashes of civilization's ruin rises Alicia, a gritty young girl born and raised in this terrifying new world. With a pistol in one hand and her trusty machete in the other, Alicia forges through nightmare after nightmare in search of a safe haven and trustworthy friends.

It is a dark realization, but she learns in her travels that some of the monsters wear human faces.