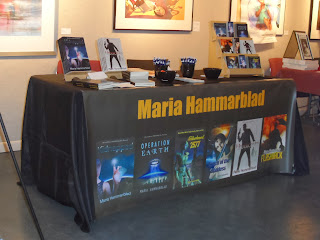 I've spent the day at the Sarasota Book Fair, and I had a great time! Hubby went with me. I didn't think he would, because he usually dislikes events, and doing something together was awesome! I met some good friends, made new friends, sold some books, and bought a book. I had so much fun I even signed up for another fair.

Once I get settled down and unpacked enough to go through my business cards I will highlight some of the fantastic writers I met.

When someone stopped at the booth but didn't really make contact, I patted my pile of Kidnapped and said, "I'm in the business of abducting people and sending them to space."

A corny line, maybe, but it turned out to be an ice-breaker. One woman rewarded me with true laughter. That in itself made the day worthwhile!

I met one of the area's local graphical artists and got praise for my book covers. She's very talented - her portfolio blew me away - and that compliment warmed the ego since I've done the ones for my self-published books myself. I also love the Desert Breeze Publishing cover artists. Kidnapped, Operation Earth, Undercover, Flashback... They're all awesome!

The cover for Undercover turned out to be an attention-grabber. Several people stopped to talk about it. "Hey, that looks like James Bond."

Great conversation starter! I brought a poster of Kidnapped, but maybe I should make some of the other books as well.

I was surprised over the varying interest in my books. I sold the most of Touch of the Goddess. I didn't expect to sell any of that one. On the other hand I expected to give away lots of pens, candy, and post cards. The visitors seemed to think all that was okay, but they'd rather talk about books or publishing.

A part of the Goddess mystery unraveled as one of the other writers told me the book and I were mentioned in an article in one of the local newspapers. The journalist wrote that I paint out a hopeful future for the human race.

I guess it's true for "Touch." I tend to think of all the books in series as one entity, and in books two and three the human race has something of a hard time, but all's well that ends well. Right? ;-)

Anyway, during the years I've been to plenty of shows for many different employers in various areas of business, but this one was the first for me, and it felt great.

Thus far I've only done virtual book tours, but now I have one event per month with real-life interaction planned for the foreseeable future. =D
at October 05, 2013

Email ThisBlogThis!Share to TwitterShare to FacebookShare to Pinterest
Labels: life, my books, shows and events