The SFR Brigade Presents is a blog hop where sci-fi romance authors present snippets of their work. This week, I would like to share an excerpt from my book Kidnapped.

Patricia expected to be home, in her own bedroom, or in an ambulance, or maybe a hospital, but when she finally managed to focus, she found herself staring into a pair of cold and dead blue eyes. A male voice said something in a language she couldn't understand, "Koira cha tinn? Waplaho banejem cackat tor tebe? Kako ya ting ro thrab?"

Since the words didn't make any sense and the eyes frightened her, she looked at the rest of the face, and immediately wished she hadn't. Half of it was handsome, but the other part came from a nightmare.

She had been raised not to make fun of people, to believe a person's looks in no way mirrors the inside, and not to stare at others' misfortune. It was still almost impossible not to gawk at the combination of scars and destroyed skin that made up most of his left cheek, stretching up towards the temple and down toward the chin. It was both deeply tragic and terrifying.

Trying to pull back from the horror in front of her didn't do her any good. She was in a chair with her arms tied to the armrests, and there was nowhere to go. The man spoke again, repeating the words from earlier, and she found herself babbling, "Who are you? Where am I? I can't understand a word you're saying, please don't hurt me."

The cold eyes locked in with hers, and what she saw in them frightened her. She imagined it to be the gaze of a mass-murderer, empty and void of the life that fills normal people. She was no doubt selected to be his next victim. She whispered, "Oh, please no, I don't want to die." 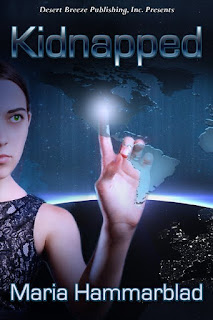 When she awakes, she finds herself a prisoner of the unscrupulous Alliance Commander Travis 152; an intimidating man who demands information and complete cooperation. Travis soon realizes his mistake; Tricia doesn't know anything, and she is incapable of even getting a glass of water from the ship's computer.


Kidnapped was released by Desert Breeze Publishing in 2012, and is available as e-book and paperback.