The SFR Brigade Presents: Shadow of a Man

The SFR Brigade Presents is a blog hop where sci-fi romance authors present snippets of their work. This week, I'm going with my brand new release, "Shadow of a Man."

Shadow of a man is a novella in Desert Breeze Publishing's Borealis series - a number of stories written by different authors but set in the same environment. I love the series, because every writer brings something different.

Click here to check out the other writers participating this week! 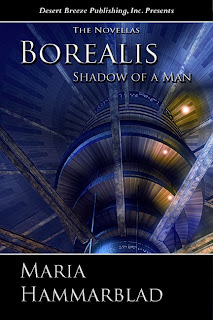 Excerpt from Borealis XII: Shadow of a Man

Theresa left the ship between Dominic and Geo, struggling to keep her back straight and her head high. Hiding behind one of the men would be most excellent, but unbecoming.

How could anyone be expected to believe she and Giovanni were siblings? She was short with a head full of brown curls, and he was tall with a mop of fair hair crowning a face that looked nothing like hers. Adopted, maybe... Or with a different mom or dad, maybe from different planets...

At least no one questioned them.

At least she still remembered her new name. Riza sounded enough like Theresa to be feasible for her.

She took in the new environment in quick glances, doing her best not to stare. The station wasn't as bad as she expected. She had imagined the place to be busy, dirty, and smelly.

I don't know why it should be smelly. Seems prudent, is all.

Everything in sight was neat and she wanted to grab Dominic's arm and ask about it, but he was too far away. Geo, on the other hand, had apparently developed a knack for reading her mind.

"We've gotten priority docking; regular ships don't come in this way. The normal docking bay is a couple of floors below us. The top floors are the nicest. The further down you get... Well, you'll see when we go to Korn. You won't want to wander any further down than that." The upside of being rich: even with false identities, money gave better treatment. She still hadn't expected anyone to regard them as VIPs.

Had someone in the Protectorate developed a sudden affection for her husband?

It could be a trap.

The stress was getting the better of her. She wanted to wipe her palms on her clothes, but she couldn't do that. Could everyone see how nervous she was? If anyone gave them away it would be her. Too much pressure!

What did he say? Something about the lower levels and not going there...

"Well, how bad can it be? It's not like they eat children or anything, right?"

Geo didn't answer. She didn't think Dominic paid attention to her, but he glanced over to meet her eyes and gave a huffing noise. It could mean anything, but sounded an awful lot like "yes."