Cass Goldman is at the end of her life, and decides to end it for both herself and her dog. Right there I decided not to like her. If you want to move on to whatever's after this life that's fine, but leave the dog out of it. As the story moved on, I still couldn't help but love her.

Cass is re-born into the body of Casey Davidson, and calling Casey a troubled teen would be an understatement. Cass not only has to adapt to being a teenager with all that comes with it - raging hormones, school, parents, and homework - but she must also learn to navigate the darker undercurrents of Casey's life, a task much more complicated than it appears at first sight.

Liza O'Connor has a knack for creating believable characters, even when they end up in the most fantastic settings. They come across as real people, with real people's hopes, fears, victories, and failures. This book touches on some serious subjects, but O'Connor keeps it light and humorous. 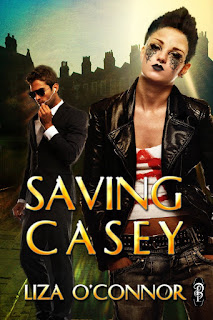 When she awakens in a hospital, Cass discovers two disturbing facts: One, she is now inside the body of a troubled teenager, and two, the former owner of this body committed suicide, but only Cass knows that. Everyone else believes Casey has survived, but suffered a complete memory loss. Cass has two choices: to take on Casey’s life and turn it around, or to confess the truth about her reincarnation and end up in a mental asylum. Given this second chance to life, Cass decides to take on the future life of Casey—the frightening ghoul-faced teen with short, black, spiky hair.

Will her second chance at life prove to be worth the struggles she has to overcome?