Book spotlight: Sacrifice for a Kingdom by Patricia D'Arcy Laughlin 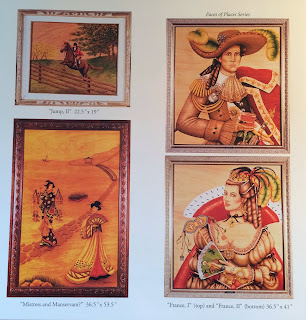 I met Patricia D'Arcy Laughlin at an author event in Sarasota a while back. She is a lovely person who creates fantastic art. I haven't read her book, but if it's anything like her, it's great.

Patricia has developed a secret method and formula for making stains and painting wood. Her art gives the effect of inlaid wood, but with more detail. Creating one piece involves many sandings, stainings, scrapings, paining, hand rubbing, and finishing, and one painting can take weeks, months, or years to create.

She has received a number of awards in the art world, including the Best of Show prize of excellence from the Ville Tonneins Museum in France.

Okay, I should focus and tell you about the book. =) 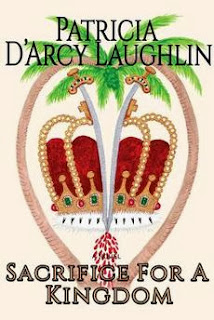 A sensual, timely, contemporary romance about a philanthropic beauty from exotic Trinidad, a modern-day socially-conscious European Prince, and the other loves, lives, and lies that complicate their potentially idyllic life. The story begins with the warm sweetness of falling in love before becoming inflamed with passion, intrigue, and danger.

No Cinderella, Elizabeth is sophisticated, wealthy, and hides life-changing secrets. Not merely a figurehead, ambitious, courageous, and fun-loving Prince Michael also has secrets. Some are life-threatening, all are hazardous. Both harbor fears for the survival of humanity, and do their parts to alleviate them with speeches. Elizabeth’s speech is titled ‘God Has No Gender,’ Michael’s, ‘Climate Change, Man’s Fate Or Folly?’

More afraid for her safety than his own, Michael is determined, at any sacrifice, to stop her from doing more of her controversial speeches, but Elizabeth uses them to fund an important charity she co-founded. He struggles with fears of losing the monarchy and waiting to unravel the mysteries of Elizabeth’s haunting past. Learning about her history takes him to a place he never dreamed possible.

Their vividly titillating and sometimes humorous lovemaking contrasts with their involvements in serious social issues. As shocking secrets are progressively revealed, loyalties become divided, but will love conquer all?

Set in the USA, Europe, and the Caribbean, the love saga takes readers on an enthralling, enigmatic, erogenous, but earnest journey through their exciting lives, crossing continents and cultures, places and races, until an assassin’s bullet hits its mark. Faced with an unexpected sacrifice, Elizabeth’s formidable dilemma is how to save both the opposing Kingdoms.
at November 11, 2013