The future is near

Many variations of science fiction focus on interesting technology that might be available at some point in the future. In some instances, the future is much closer than anyone could have imagined.

Remember the old TV show Viper? It featured a car with a surface of little disks, allowing it to change color. At the time I thought the idea was cool, and that it must be a bank robber's dream. Today, it might not be reality in large scale production, but there are color changing cars.

In Great Britain, people painted an entire car with heat sensitive paint so it can chance color depending on the weather. The end result looks a bit funky in my opinion, but it works. And, Toyota revealed a concept vehicle able to change color according to the driver's mood at a car show late last year.

Mood-reading vehicles without steering wheels -  that can change color - sounds like science fiction to me.

The website phys.org talks about the Toyota concept car, "The FV2 appears to represent a convergence of technology with aspects reminiscent of smartphone apps, the Segway, robotics and virtual reality applications."

There are also rumors of a nano paint that can change color with the press of a button. I don't know if it's true or not, but even if it isn't, I'm sure it will be. 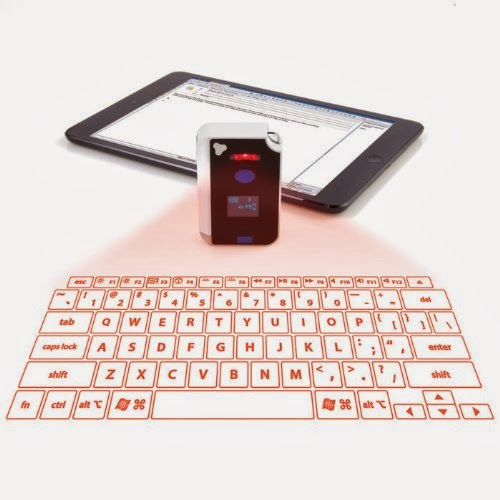 There are other cool inventions that sound like sci-fi.

About a year ago images circulated on Facebook promising a holographic keyboard. At the time the product didn't exist. Now, you can buy a laser projection keyboard on Amazon.

I haven't tried it, so I can't say if it works well or not, but it's cool. Some reviews say it's awesome. Others say that it works, but it needs a flat surface, and the user can't type too quickly.

My inner geek claims I have to have one. The more practical side says that I type very fast, that I would be annoyed with it, and that there's probably a learning curve with typing on nothing instead of on actual keys. I might still get one. We'll see.

Other cool things? A Canadian company named Thalmic labs have invented a bracelet that uses motion-tracking sensors to measure the position and orientation of a user's arm. It also senses the electrical activity of muscles for finger movement, and can read gestures such as pinch, point, and grasp.
at January 08, 2014