When I checked my e-mail the other day, I had a message from Amazon saying, "Your order has shipped." That would be awesome - if I had placed an order. Looking at the account revealed a pair of Beats Studio headphones going out to a Daniel Drecker in Indiana.

I contacted Amazon and said that I don't know a Daniel Drecker, I've never been to Indiana, and I certainly don't want to send him a $300 pair of headphones.

Anyway, Amazon investigated, and it turns out this guy chatted with them giving my e-mail address. He somehow figured out that I have ordered Beats Studio headphones in the past and persuaded them to send a replacement order to him.

If I hadn't been alert, I wouldn't have realized this until Amazon started asking me why I didn't return the broken pair.

Amazon stopped the shipment, removed his shipping address and the fraudulent order from my account, and I changed my password. I also contacted the website ic3.gov where you can report Internet-related crime.

Today, I got a message from Amazon saying, "I'm writing to follow up on our recent chat conversation. I've forwarded your inquiry to our Account Specialist Support team regarding to reinstate the replacement order. You should hear back from them by 24 - 48 hours."

I said, "Oh no you don't" and sent a message to Amazon to let them know he's trying again.

To be fair, Drecker might be an innocent third party used as a shipping address. He might not be involved in all this at all. He might not even be a real person. For all these reasons I decided not to post his name, address, phone number, and so on the first time all this happened.

If you try to defraud me twice in a week you're making me mad.

Also, if you attempt to defraud someone and the shipment is stopped, you've clearly been discovered. Doesn't it seem stupid to try again?

This time I changed the e-mail address associated with my account, updated the complaint at ic3.gov, and called my local Sheriff's office. I didn't know what to expect, on TV American police seem kinda scary, bit it was a pleasant surprise. The guy who answered was awesome.

He had a pleasant phone voice and took me seriously. He was kind, calm, filled with good advice, and clearly someone to hide behind when the bad guys close in. My only regret is that I can't remember his name.

Moral of the story? Keep an eye on your accounts!

Besides all this real life stuff, I'm sure you've seen Internet memes like this: 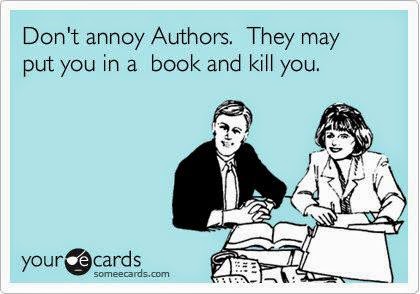 Daniel Drecker in Indiana is now scheduled to be an annoying side-character in a book. He's not worthy of main character status, but he will definitely be in there. The nice man at the Sheriff's office will model the hero, of course, and I'm thinking of making up a crime syndicate for him to battle.

Besides giving fuel for my imagination, Drecker is an annoying little twirp. It doesn't matter if he's really in his 50s and six feet tall; he's still a little twirp.