Liza O'Connor, Climbing Out of Hell

I have a special treat today: a guest blog by Liza O'Connor on her new book, Climbing Out of Hell. Welcome Liza!

What type of changes can a plastic surgeon do to alter an identity?

Here’s Trent before and after his transformation.

Since Trent couldn’t decide between his choices, the doctor said he’d do the one that would require the least recovery time, so in many ways, the faces are much the same. 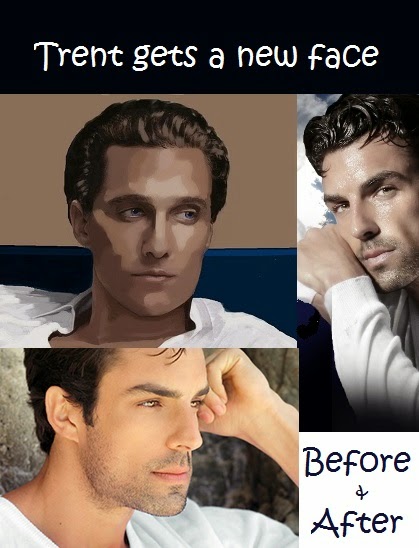 (Before is top left, the other two are afters)

Lower eyelid surgery combined with canthopexy turned the corners of his eyes slightly upwards and reduced the skin beneath, creating a pleasing, narrower almond shape to his eyes. His eye color was permanently changed from blue to brown with the use of Lumigan, which also gave him thicker eye lashes.

Rhinoplasty was done to add a very small bump to his nose. His lips got a bit of collagen. His ears where modified to prevent matching to former photos by the FBI.
Then he was given a low dose of steroids to build up his muscles

Other, non-surgical, but important changes were to cease plucking his eyebrows, allowing them to grow out naturally, to shave less often so he always had a facial shadow, and instead of sweeping his hair back, exposing his square forehead which was  now modified with some strategic hair plants, he let his locks flow down upon his forehead in a carefree style.

The above changes would prevent strangers from matching him to his former self.

However, a person who knew him well might still recognize Trent if he carried himself in with the same attitude and maintained the same expressions he had before. (In Trent’s case, that would be arrogant petulance.)

But Trent’s loss of Carrie broke him fundamentally. He lost his arrogance and without his money to back him up, he had to find a new way to get people to do things for him. He uses charm and persuasion like Carrie always did.

Not only did it help get people to work with him, but it changed his normal expressions, so when he follows his brother to Denton Iowa, Sam doesn’t recognize him and they become best of friends.


Here are some other changes that can realistically be made to change your looks:
•        Bone can be shaped and new bone or chin implants can be added.
•        Flat cheeks can get cheek implants or fat injections.
•        Thick lips can be decreased in size by cutting out a thin strip (from inside the mouth).
•        Loose skin can be pulled tight and excess removed.
•        Scars on the face can be eliminated or improved by scar revision surgery.
•        Body shape can be greatly modified (Increase or decreased).
•        Liposuction can eliminate fat from any section of the body that holds fat. (double chins, flabby arms, waist, butt, thighs.)
•        Acne or pock marks on the face can be smoothened by dermabrasion surgery.
•        Botox injections can remove brow furrows &amp; emotions from a face.

In the end, successfully changing yourself, is more about attitude and behaviors than it is about changing your body.

However, to be safe against software ID systems, you need physical modifications. And even then, you might still get flagged, depending on the work done to change you, since it uses the distance between the eyes, the width of the nose, the depth of the eye sockets, the shape of the cheekbones, and the length of the jaw line that software uses to match faces.

However, in real life practice, the software is far less accurate than TV makes it look.
Just a change in lighting can alter the way a camera reads the features. Eyes can look more hollow, cheeks more gaunt. Turns out in practical application the software is accurate less than 65% of the time.

The chances of Trevor being matched to an old Trent picture drops even lower. In fact, even if the computer flagged a match, when an FBI agent looked at the two pictures, he would probably declare it a false match and disregard it. That’s because Trevor’s new outlook on life is markedly different than old Trent’s. A good agent can read expressions and will conclude these are two different guys. 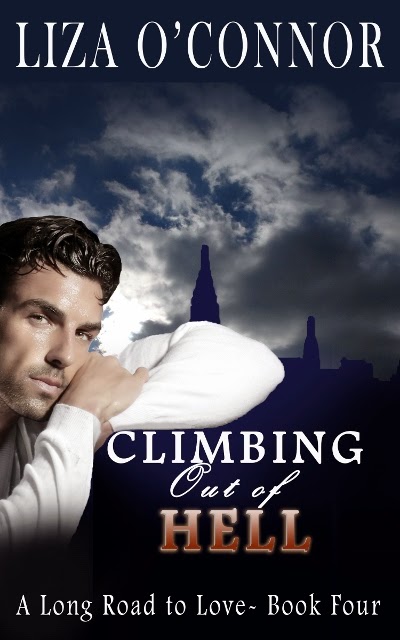 Billionaire Trent Lancaster has destroyed his relationship with the only woman who ever loved him. Now we discover the full truth of what happened.
He actually had reasons for his behaviors.
Still, there is no going back. Trent has lost Carrie forever, but he would rather die than marry Coco, so he does just that. Trent gives away most of his possessions, fakes his death, and starts over with a new face and a better attitude in a small town in Iowa where his half-brother Sam is sheriff.
Losing his true love has fundamentally broken Trent to his core. His only chance for happiness is to become the better man Carrie had always seen inside him.
True change is not easy. Can Trent grow up and become a man we can love?

Excerpt
Sam burst into the kitchen, frowned at Trent, then focused on Dani. “Leroy is at it again. I thought you said you were going to hide the damn thing?”

“Well, you hid it worth shit because it’s raining lead again at the downtown square!”

She gripped her head as if it might explode.

Sam rolled his eyes. “Iowa passed a law allowing blind people to carry guns in public. So her grandfather, who is blind as a bat, sits on a bench in the square and shoots his AK into the trees.”

“What’s he trying to shoot?”

“Pigeons,” Sam and Dani answered at once. She glared him into silence and continued her reply. “He likes pigeon soup. A Pakistani doctor told him it would prevent strokes.”

“Well, he’s giving me a stroke,” Sam snapped. “You have to make him stop!”

“I’ve talked to him until I’m blue in the face. He won’t listen to me. Most of the time he thinks I’m three-years old. Who listens to a three-year-old?” She threw her hands up in frustration and turned back to the grill.

Trent didn’t care for the way Sam pushed Dani. Grandparents were impossible to boss around…at least his had been. “Why don’t you talk to him?’

Sam released a hurricane of air. “Because the mayor told me to stay away from him, since he is not breaking any laws, and any attempt on my part could result in a lawsuit against the town.” He eyed Trent. “You should talk to him.”

“Sam, Trevor’s been in town an hour. You know Gramps doesn’t trust people right off.”

“Neither do you, yet here he sits, like an old friend, watching you cook him dinner.”
She rescued the burgers off the grill, slapped them both on buns, and shoved one at Sam. “This is your hamburger. Trevor is holding out for braised lamb.”

“Point still stands. Look, I think he can do the job. I intended to hit him with a ticket but he was so nice I sent him to you instead. He’s a likable guy. Let’s send him out and see if he can stop this madness.”

“Then I’m shutting this bar down for safety violations.”

She stared at him in shock. “What violations?”

Trent stood up. “Sam, you’re digging yourself into a hole. Your initial solution was excellent, and frankly I’m honored you think so well of me. I’ll go talk to him right now. Just tell me how to get to Pigeonville.”

Sam grinned and slapped him on the back as he led him out of the kitchen. “Way to man up. Seriously, I’ll owe you one if you can get the gun away from Leroy and bury it six feet under.”

Trent just hoped being a nice guy didn’t get him buried six feet under as well.

Links
Released May 1, 2014
Book Four of the series:
A Long Road to Love
Climbing out of Hell
Amazon

Other books in the A Long Road to Love series
Book One
Worst Week Ever
Amazon
“Love this book and couldn't stop laughing from beginning to end.” 5 stars – Alves - Amazon

Book Two
Oh Stupid Heart
Amazon
“Be warned though, this book is completely different from The Worst Week Ever. Yes, there is still humor, dry wit, situations that you would think...NOT AGAIN but this one humanizes Trent more.” 5 stars - Brian’s Mom – Amazon

Book Three
Coming to Reason
Amazon
Once again, Ms. O’Connor has written a brilliant book about the complexities of relationships, good and bad. Again, to me, the book is the best break up book EVER and it left my heart singing in the end. Best.Book.Ever…

Liza O’Connor
Author Bio:
Liza lives in Denville, NJ with her dog Jess. They hike in fabulous woods every day, rain or shine, sleet or snow. Having an adventurous nature, she learned to fly small Cessnas in NJ, hang-glide in New Zealand, kayak in Pennsylvania, ski in New York, scuba dive with great white sharks in Australia, dig up dinosaur bones in Montana, sky dive in Indiana, and raft a class four river in Tasmania. She’s an avid gardener, amateur photographer, and dabbler in watercolors and graphic arts. Yet through her entire life, her first love has and always will be writing novels. She loves to create interesting characters, set them loose, and scribe what happens.

Don’t forget to enter the Rafflecopter for the $50 Gift Card.
Plus, at each stop 1 commenter who requests a book and leaves their email will win one of the following:
Worst Week Ever
Oh Stupid Heart
Coming to Reason
Ghost Lover