What's the most annoying thing people say to you?

When I still had a daytime job and mostly wrote fiction at home, people saying things like, "But you're only playing on the computer" would drive me crazy. Phrases like that convey that whatever is being done isn't important.

I think everyone with a creative job encounters comments that push their buttons at some time. I base that assumption on finding innumerable images like the below on the Internet. ;-) Most of the points in the image don't annoy me, actually. People mean well, and it's a good thing that they show interest.

I mean, I don't walk up to people and say, "Oh, you're a plumber/carpenter/teacher? Is it hard? I've thought of doing some plumbing at some point in time." Writing is interesting enough to engage people's imagination even when they're not reading. 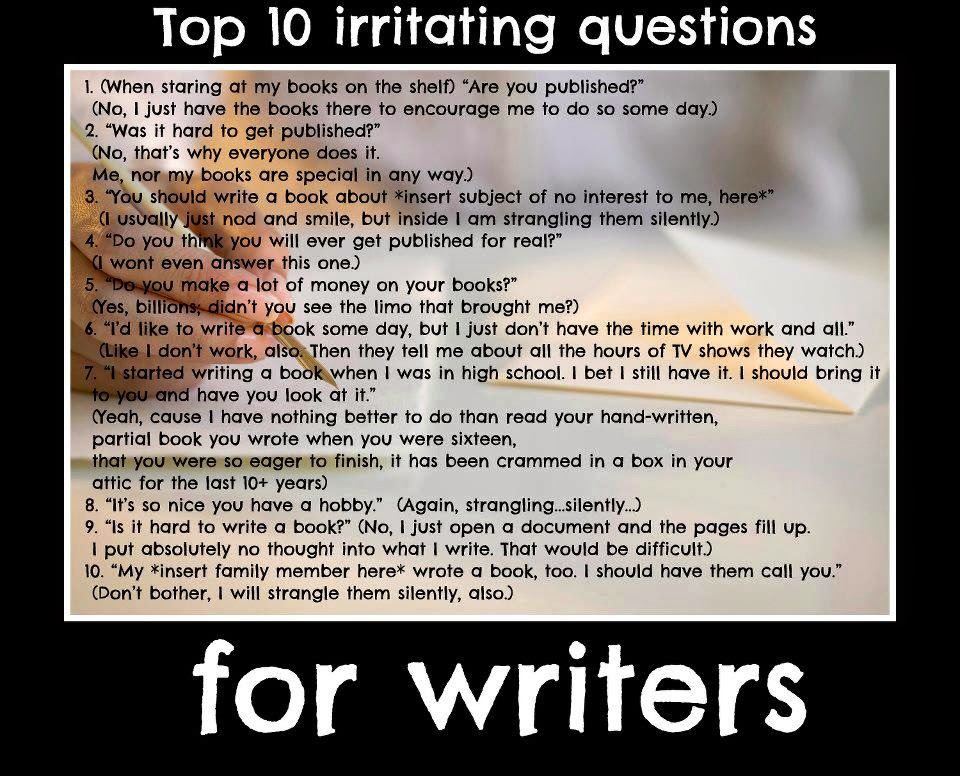 Anyway, since my husband fell ill and I started my little Sadowski Media to be able to be home with him, I've encountered a similar problem.

This time it's not just annoying; it's serious.

My husband told his doctor's office that I have my office in the back of the house. It's true, and this room is one of the reasons I really wanted this house. My office is bright with four windows, has a door to the outside, and can be shut off from the rest of the house. It's awesome!

Anyway, it took them about 0.2 seconds to reach the conclusion that if I work from home I don't do anything, and I have all the time in the world. 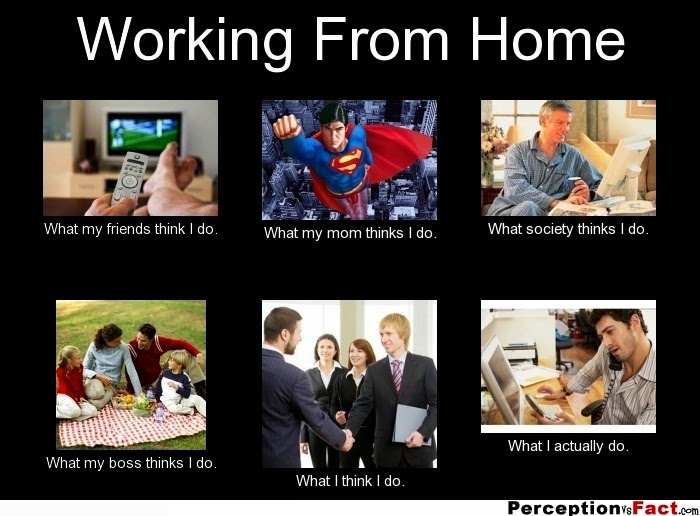 They think it's okay to call at all weird hours to reschedule appointments, create new and unexpected appointments, and let us wait forever, because I work from home so they can't possibly be disturbing something. I have a hard time appreciating the attitude of, "at least you guys aren't in a hurry anywhere."

This week they even took upon themselves to call and reschedule his appointments with other doctors, so they could get a time that fits them better than the one they originally gave him. Happy surprise, we've changed your day around.

It could still be okay if he would go to the appointments on his own, but if I don't follow him, he won't go.

There's only one of me and I have to plan my time. I work seven days a week, usually from morning until night. I need to provide for us, spend days every week in doctors' offices, take care of the dogs, cook, shop for groceries, fetch lunch for hubs, do laundry, do dishes, clean the house, care for the yard, and so on. There isn't enough Maria to cover everything, especially when people keep messing up the schedule.

Replace the baby with a dog, and the image below becomes pretty accurate. (That, of course, doesn't stop people from wanting to pile more stuff on me.) 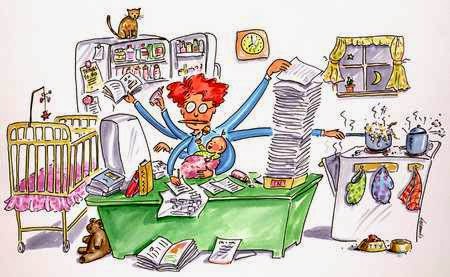 The funny thing is, if I went away from the house to work for someone else every day, people would get it. There's something magical about the phrase, "I have to go to work" that implies, "Leave me alone."

I'm pretty good at what I do. I have an ample supply of work, but in order to get paid I have to actually do it. Every day. If I move too many of my appointments people will think I'm difficult and find someone more reliable and easier to work with. Worst case scenario, well...

I'm frustrated and exhausted, and thus far, saying no has accomplished nothing. We'll be going in to the doctor's office soon, because naturally today's appointments were moved, and I will have to explain all this again. If they don't stop screwing with my time I won't be able to pay his health insurance, and then they won't get paid. Maybe that's a line of thought they can understand...

For all you writers, artists, and small company owners out there, have you experienced something similar? What is the most annoying thing people say to you?
at June 09, 2014