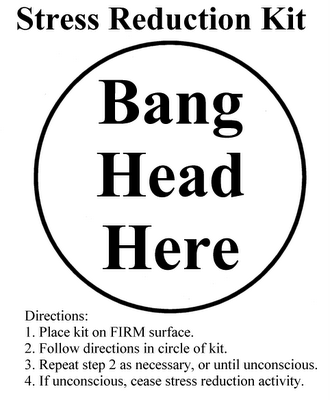 I'll have to back up a bit for this post to make sense. I'm sure some of you have heard it before, so skip the first couple of paragraphs, LOL.

A couple of months ago my husband fell ill and eventually had to succumb to going to the hospital. To make a long story short, he has a big tumor, and ever since then we've bounced between healthcare providers like balls in a pinball machine. It's tough, and poses many challenges.  Like, I had to quit my job, because I couldn't make the schedule work out.

Going from full time employed to self-employed virtually overnight was scary, but I was confident I could pull it off. Right now I work more than ever before and make less money, but I'm happy. I like working from home, surrounded by my doggies, and I'm glad life pushed me to really do it.

The problem is, hubs refuses to go to his appointments on his own, which I understand. He's not feeling well, and dealing with all this takes a healthy person and more. I can't make the healthcare providers understand that in order to make money - which pays for health insurance, amongst other things - I have to work. That implies being able to plan my days.

I have a schedule. It starts at 7:30 AM every day around the week, and I know exactly what I need to do every half hour of the day to make everything come together.

Healthcare providers set appointments, and naturally, I plan around them.

Cancer center number one - the one that gives chemo - has done good with scheduling for a while.

They're really sweet, but changed the appointments at least three times every day until I lost the Swedish polish and told them this would have to stop. Since then they've been really good until today. If they start all that again I might have to remind them how much trouble they cause, but I'd really rather not, because they're awesome. The doctor is so nice, the nurses are fabulous, and the front desk girls are fantastic.

Cancer center number two gives radiation treatments and we have to go there every day. They're also awesome, but they don't get it at all.

The first day we sat foot in the clinic - and waited for well over three hours which has caused me to live on toast for the past week due to loss of income - I told everyone that we need appointments in the afternoon. Preferably after four. Everyone nodded and pretended that they understood.

Reason? We have to be there every day for seven weeks. Driving there, waiting, the procedure, and driving home takes at least an hour. I can't afford to lose 35 hours more of income than I already have through sitting in waiting rooms. If I do, we'll lose the house.

I'm not joking. I'm a lone provider for two adults and four dogs. We have hospital bills for almost $60,000. I need to work to pay the mortgage, keep the power on, keep the phones working, and all other good stuff a household needs - like food.

Every day, they give us an appointment for the next day at a decent time, and every day they change it. Every day, they seem equally shocked when I say no.

I explain this every day. I'm starting to think I accidentally speak Swedish.

Check this out. Tuesday morning last week they had us come in at 6:30 in the morning. That was going to be a one-time thing only, and we had a time set for late in the afternoon Wednesday. As I sat there watching the sun rise, the nurse came out and said, "I'll need to change your appointment tomorrow. How about 10:30?"

I said, "No. I'm going to St Pete's for a meeting tomorrow morning. We need a time in the afternoon. Like the one we already have at 4:30."

She said, "I understand. How long will you be gone?"

"I don't know for sure, but I don't count on being back before lunch."

"No, I'm going to St Pete's, and I won't be back until after lunch." I feel like a parrot - I say the same thing over and over and over again, every day, and they still don't listen.

"Okay, I'll let you keep your appointment. I guess we'll have to move someone else."

The next day, they started calling hubs, trying to change the appointment to the morning. He explained that I was away at a meeting and he couldn't come. The same person called several times within a few minutes. Because if I'm expected back after lunch I will surely come home between 9:30, 9:32, 9:35 and 9:40...

I came back around one, and we went in at the time we originally had.

This continued through the week. Thursday night I wrote the clinic an e-mail. The only answer was to call hubs and change the Friday 4:30 appointment to 12:30. I said no, but it was still 12:30, because suddenly every other appointment - including ours - was impossible.

I'd had it. I was so mad when I came in I was about to storm past the reception desk and find someone responsible for all this crap.

They saw the crazy-woman glow in my eyes and the horns about to grow out on my head and ran for reinforcements. An experienced nurse came to the waiting room, sat down, listened patiently, nodded, and said,  "So how about right after one?"

I said "No" and explained it all again. She tried to counter and I said, "I'm sorry, but there's too much at stake here for me to be able to care about that."

I save up the type of work I can do in the waiting room in the afternoon. The parts of the job that include communicating with people needs to happen when they're available.

The other people in the waiting room chimed in, "C'mon, she has to work, give her a late appointment."

Faced with overwhelming and probably surprising opposition, she disappeared off and came back with a note. "Monday through Wednesday next week, we'll get you a 4:30 appointment. After that you will have a standing time at 4:15 every day. We will not change this."

I was really happy all weekend. I felt like a boulder lifted from my chest. Silly naive Maria, believing what people tell her, after all these years...

Yesterday, a new nurse came out and wanted to change today's appointment from 4:30 to earlier in the day. I said no, and explained the whole thing again. We ended up settling for 4:15.

Today, another new nurse came out. She said, "I have an appointment for you tomorrow at 3:30."

I said, "We already have an appointment for tomorrow at 4:30."

She looked at me as if I sprouted antennae.

"But, we have so many empty spots in the middle of the day, and we have to fill them. Can you come earlier?"

"No. I have planned my day around being here at 4:30. He has another doctor's appointment in the morning, and I have a meeting between two and four.

"Probably around 4:30. I'm not sure how long my meeting will take, but I counted on it lasting until four."

It still didn't sink in. She said, "Our managers look at the schedule, and they see all these openings in the middle of the day, and we have to fill them."

By now I'm starting to think I'm surrounded by kind and pleasant idiots. These people are the nicest you can imagine, but they clearly don't understand English.

I said, "I'm sorry to have to say this, but your scheduling issues aren't my problem."

She recovered quickly, and said in a cheerful voice, "So we'll see you at 3:30 tomorrow."

"No you won't. I have a meeting. I have to work. If I can't work I can't pay his health insurance, and no one here gets paid."

That one usually works. She said, "So, when do you think you'll be here?"

"Okay, I'll keep this time for you at 3:30, and we'll wait for him. Some patients are really serious and we try to take them in late in the day in case it takes longer, so everyone else won't have to wait. Especially on Thursdays, but tomorrow isn't Thursday, so we should be able to get him in."

I thought,  "So why are you changing the appointment in the first place, when you know we won't be here until 4:30, which was our original time?"

The problem clearly needed another approach. I held up the computer and explained what I do for a living. I showed the blog posts I'd written while waiting, and showed that company's app on my cell phone. I explained how I have customers I need to talk to at particular times every day, and how I have a break around four every day. I explained - again - the domino effect of changing appointments.

She nodded and said, "Okay. I'll try to get you a steady appointment, so you can come in at the same time every day."

"They gave us that on Friday. It was supposed to be 4:30 Monday through Wednesday this week, and after that 4:15 every day."

"Yeah, that's not gonna work. When is a good time for you?"

It's a good thing these people are so nice and friendly. It keeps me from snapping.

I took a deep breath and said, "In the afternoon. Some time after four is best, like 4:15, when our appointment is."

"I can get you any time in the mornings. I can get you in early, so you don't have to worry about this the rest of the day."

She's doing her best, I get it, but it still doesn't work.

"No, as I mentioned, I have a lot to do in the mornings. As long as he needs me to take him here we will come as late in the day as possible."

She attempted to explain their scheduling problem with a lot of gaps during the day again. It's a valiant effort, but it doesn't change the fact: as long as he needs me to take him, we can't come in the middle of the day.

I said, "I'm sorry, but that's still not my problem. I have other problems of my own, like supporting my family."

I have to see this from the comical side, but even when doing so it's still frustrating.

It reminds me of these commercials, "Nine months? I can have a healthcare career in only nine months?"