I didn't get much written in 2014. Or rather, I wrote more than ever before, but none of it was fiction or for fun. In retrospect I think this is part of what made the year so hard for me; suppressing the creative side made me feel like I lost a part of myself, and besides having a hard time with things that actually happened I battled myself to stay on track with things that had to be done.

2015 is off to a better start. Hubs isn't feeling great, but he has been good enough to be able to go to most appointments on his own, pick up his meds by himself, and stuff like that. This has been a huge relief for me, partly because I'm less worried for him of course, but also because I've had some time and peace of mind to actually work - during daytime.

It's really hard to keep a household together, make sure everyone is fed and the bills paid when you're waiting in healthcare facilities as much as 20-30 hours in a week. Before all this happened I could never have anticipated how much time I would spend just waiting.

Most people around me have been fantastic. I found more support than I could ever have anticipated, but a few people seemed eager to add to the burden. Not cool. Luckily, by the end of the year I was so tired I didn't care about others liking me any more. Being able to tell people to sod off was a great relief, and solved several problems. LOL.

Anyway, this post was supposed to be about making a creative change. Things have gotten a little better, and while I still don't have the inner peace to write, I decided I wanted to start playing bass again. I used to play in three bands back home, and I miss it. I'm not great, but I'm good enough. (I don't have any playing-buddies here, and I don't have time for rehearsals and gigs, so I play along to a playlist or the radio or whatever.)

To accomplish this outlet and get some peace of mind I've decided to set time aside for Maria-activities after dinner every evening. I also aim at taking at least one day off every week. I couldn't do this in 2014 because I spent so much time at the cancer centers, but now I can actually spend a little time on me. I've been playing bass and reading books, and it's heavenly.

I'm much happier. I know I should be working during that time too, or at least cleaning or doing dishes or something, but screw it. Careful consideration led to the conclusion that I'm important too, and in the long run no one wins from me being miserable.

The next step in winning back "me" is to create enough space in the schedule and inner peace to get back to writing. I have so many almost finished stories that I want to get done, and new ones brewing in my head. If things keep going well maybe I'll have a new book or two out before the year is over.
at January 30, 2015 No comments:

My life runs on battery

You would think that in the year 2015 we would have invented a better power source than traditional batteries. Don't get me wrong - they've improved - but they're nowhere near what a science fiction writer can imagine. The only difference is that I have more stuff powered by batteries now than say ten years ago.

Seriously. My computer keyboard runs on battery, as does my computer mouse. Cell phone, company phone, iPad, Kindle, calculator... Even one of my basses has a battery. Many of them are rechargeable, of course, but that doesn't help much since I'm really bad at plugging stuff in. 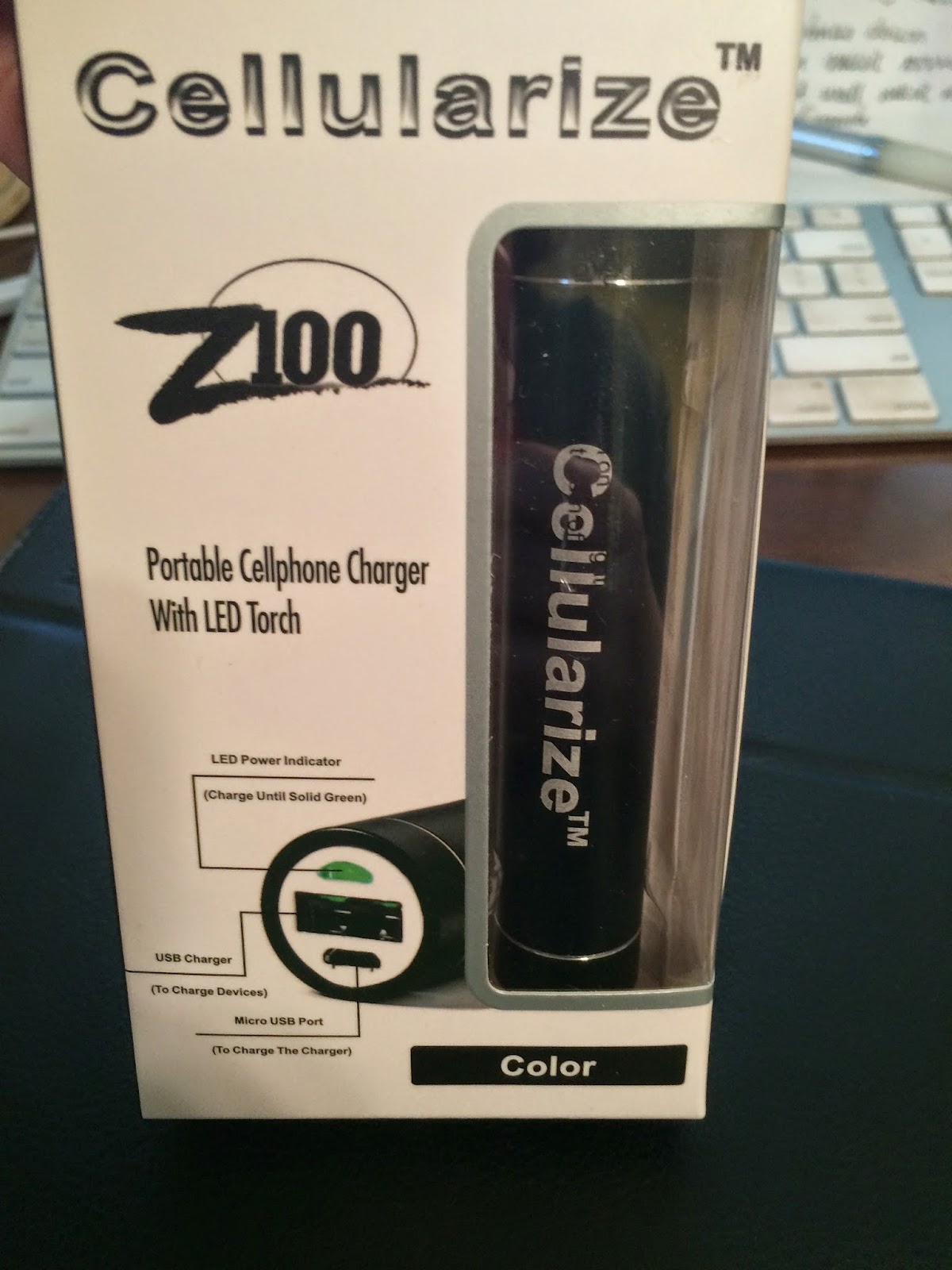 At least a couple of these problems have been solved lately. I got a Cellularize portable cell phone charger here. I have something similar, but the Cellularize runs circles around the other charger.

It is heavy enough to feel right, but not so heavy that it causes a problem when tucked into a purse. It charges quickly, and keeps my phones or even the iPad running for quite some time, and it has a flashlight.

The flashlight is a big deal to me. I don't like stumbling around the yard in the dark with the dogs - they can see just fine, but I can't.

Hubs is a specialist at losing flashlights - they're in the house somewhere, but the only way to find one is through looking for something else and stumbling over one. Trust me, they end up in weird places. This flashlight is mine, because it's attached to my charger, and I know where it is.

And you know what? It's small yet to hold yet bright enough to give a good light, so it's perfect for under-the-cover reading. (Yep, I'm goofy. I still do that, like a little kid on TV if the book is good enough and I don't want to disturb the sleeping family.)

This charger comes with a good manual too, that even shows specs for the battery. None of my other chargers have had the courage to do that.

Do you have a lot of battery-powered gadgets too? Have you found a solution to running out of battery?
at January 20, 2015 No comments:

When 2014 started I predicted it would be a year filled with change. That turned out to be true, albeit most of the changes were much more difficult than I had in mind. Now it's gone, good riddance, and we're heading into something new.

Yes, I'm aware that the new year is an arbitrary point decided by humans, but that doesn't matter. It's as good a point as any to look back and make necessary adjustments going forward. I have high hopes for 2015. I hope this year will be a little easier than the last one.

For 2015, I've promised myself to take a little time every day for something I think is fun. Santa brought me a practice amp for Christmas, and I haven't realized how much I missed playing the bass until now. (I have an amp, but it's too big for a residential area, lol. Low volume on it is still pretty dang loud.) A little time playing every day has already made me a happier person. I miss my band, but playing for me is better than not playing at all.

During the year I hope to get back to writing fiction too. I have so many ideas and almost finished stories, but everything came to a screeching halt with Mikey's illness last year. If I can find some balance maybe I can finish at least one story this year - it would make me feel accomplished.

With any luck I'll get back to this blog too. I've been writing so much for other people my own stuff has fallen behind.

That's three New Year's Resolutions for me. Have you made any? Was 2014 a good year for you? Are you looking forward to the new one, or are you sad to see the old one go?
at January 02, 2015 No comments: