All these imaginary people in my head... 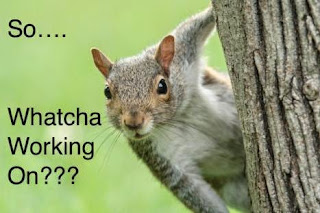 Since I'm still not able to make a living out of writing fiction, I attempt to perform paid work while the characters are awake, wanting me to write about them. This is where I run into problems.

Imagine that while you work you also have a person sitting on your shoulder, constantly telling you stories about their life, wanting you to write everything down. It doesn't sound sane when put in writing, but that's okay. I'm one of those creative types and no one expects me to be normal.

To make matters worse, there are so many bright and shiny ideas to play with, and there might be more than one character wanting attention at a time. I end up writing a little here and a little there, making slow progress on a number of stories at once.


Last night, I told myself it was time to finish something. I was just going to write down my newest idea first, and give it some form to make sure I'd remember. I looked up some five thousand words later and found it was in the middle of the night. The new hero's name is Valentin. He's a reluctant mobster. I'm not sure where he's going, but wherever it is, it'll end with a bang.

Valentin reminds me a little of Dominic in Shadow of a Man. They might be related, just from different centuries.

My writing process is dependent on the characters. I normally get to know the people in the stories first, and then they tell me what happens. Operation Earth is a major exception - it started with thinking about planes, because I lived close to an airport at the time. Most of my books start with hearing an interesting voice or accent. My imagination runs with it and makes up a person, and then we're off.

Some times in the evening, I go through my galley of imaginary people, make sure everyone's in bed with the right person, and tuck them in. That way they'll nap while I nap and no one will keep me awake.