I accomplished very little fiction writing during 2014. There was just too much else going on, and no inner peace to listen to my characters. The one thing I did accomplish was a novella intended for a sci-fi compilation: Conversion. I don't think the compilation was ever published, but the novella made me feel like I did something. 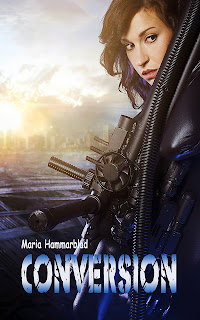 I recently read it through and made some minor edits. It got a new cover as well. The girl on the cover doesn't look exactly like I imagine Rhodesia - the heroine - but it's hard to find something that exactly mirrors your mental image, so I guess it's close enough.

What it is about? Here is the blurb:

Rhodesia runs through the forest, hunted by creatures wearing the faces of people she loves. They plead to her to wait in the voices of her family, and the sound sends chills down her back. What is worse? Succumbing, and becoming a mindless drone with the others, or perishing in the forest, alone?

Roy Planter is a man with a mission, and he has no intention of staying on a plague-ridden planet where more humans turn into mindless drones every day. Being stuck in a city, grouped with a sword-wielding stick insect of a man and a busty blonde with a too vivid sense of humor are only temporary setbacks. He's leaving, first chance he gets. At least that's what he thinks until Rhodesia arrives. Caring for someone won't make his life easier, but can he really turn his back and leave her behind?

Conversion is available as e-book from Amazon. I wanted to make it free, but they don't allow permanently free, so it's currently 99 cents. I'm making a paperback as well, should be available any day.

Here is an excerpt. Hope the blog doesn't mess up the formatting too much. =)