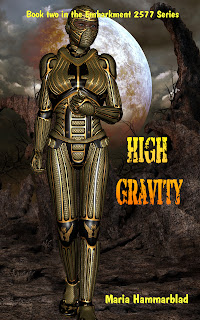 Last week, I posted the first chapter from Brand New World - the first of my Embarkment novellas. Click here if you want to read it. The second book in the series is called High Gravity, and it starts a couple of days after the first book ends.

If you haven't read book one, the novella has a prologue that introduces the characters. Here is the beginning of High Gravity. If you want to read more, it is available as paperback and for Kindle.

One of my big talents: stating the obvious.

Adam gave a slight shrug. “The place comes with the job. I never needed it for anything.”

I lived in a set of guest quarters, and it was nice, but impersonal. The furniture, lamps, and decorations might not be mine, but they still existed, and reminded me of an upscale hotel. Looking around in my boyfriend’s quarters, the rooms were huge, and contained one large desk filled with tools and gadgets.

“Why…?” I closed my mouth around the question. He was an android and normal human logic wouldn’t apply.

He smirked. “You wanted to see it, here it is.”

No wonder we always stayed at my place.

He crossed his arms over his chest and glanced into my eyes. “I have to go to work. You know that.”

Damn. His sense of duty was admirable, but couldn’t it slip just a little, just once?

Adam tilted his head to the side. “You’re disappointed.”

“No… Well, maybe a little. I thought there would be more of you here.”

He put a hand on my back and pushed me out of the living room, back into what would have been a study in a normal person’s world.

“There is something of me here. There’s the desk, and my chair, and your broken iPod I’ve been trying to fix.”

I couldn’t even recognize the fragmented pieces. The poor thing must have been hit by a bullet. What a shame. It would have contained all sorts of entertainment and memories.

My rooms were almost right under his, just a couple of floors down. Going there would normally be completely uneventful, but after an alien species called the Logg stole the ship and I played an involuntary part in getting it back, people I didn’t know stopped and stared wherever I went. I hated all the whispering behind my back.

Some of the junior officers treated me with the same awe they normally reserved for the senior staff, and it freaked me out. It was traumatic enough to arrive dead from another time. I didn’t need any additional attention.

We didn’t meet anyone on Adam’s floor and the lift was empty. Close to my door, two young men pushed a broken cleaning robot down the corridor. They stopped and stared.

“She’s shorter than I expected.”

Adam rolled his eyes and walked over to them.

“Is there a problem?”

I shuffled over to my door. “Will this never end?”

Adam ran a hand over my back. “Sure. As soon as something more interesting happens.”

The young men were out of sight, and for all practical purposes, we were alone. I pressed my palms against his chest and gave him my best bedroom look.

“Not unless you’re comfortable with Laura adjusting the starboard radiation shield.”

The annoyingly perky nineteen-year-old ensign was probably quite able to do it, but he had a point.

When it came to matters like keeping cosmic radiation from frying my brain, I’d be more comfortable with Adam handling it.

The ship rocked. I stood on the tip of my toes, wanting to steal a kiss, completely unprepared for the floor shifting underneath me. My face was about to come in close contact with the carpet when Adam caught me.

He didn’t sound bothered, but I was. Anything able to move the ship like that would have to be dangerous.

The computer’s voice echoed in the corridor. “All senior officers, please report to the bridge.”

I was barely aware of clinging to him until he took my hands in his and loosened my grip around his neck.

I watched him jog towards the lifts. Would they really be safe to use? What if he got stuck, or the thing fell all the way down to the bottom floor?

I should stop fretting and go inside. Unless I was extremely lucky, there would be crushed decorations all over the floor, waiting for me to initiate some serious cleanup.

My rooms were a bit jumbled, but not as bad as I expected. To be honest, more of it came from my being disorganized than things falling off the shelves. After visiting Adam’s desolate quarters I appreciated the chaos. It might not technically be my stuff, but it was there for me to use, and I was grateful.

Putting a lamp back up on a table, I muttered, “Someone needs to invent a force field or something to keep things in place.”

I ventured over to the window. Last time the ship rocked and I peeked out we were in a horrific battle.

This time, I saw nothing but darkness. We no longer moved, but I couldn’t see anyone or anything close.

Could there be invisible attackers?

As big as space was, odds were anything I could imagine existed. On the other hand, the ship was both quiet and peaceful, so maybe we weren’t under attack. Maybe something else was wrong with it.

I normally kept my windows covered. Seeing space fly by outside gave me a headache.
at May 23, 2015