I started a new story the other day. I know I've been saying that a lot this year, I think I have a dammed up need for writing after 2014. This one is about a Russian gangster. He's not all that interested in being a gangster, but it happened anyway.

Russia has always fascinated me. If that doesn't make sense, check out this map. I'm from Sweden, it's the long orange thing to the left. To give you a sense of the size of Russia, when it comes to area Sweden is the third largest country in western Europe after France and Spain. Compared to Russia, my country is still tiny. 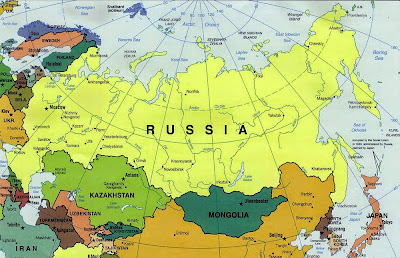 I have one book featuring a Russian already; Alexei Roshenko in Undercover. Valentin in this WIP is a more over-the-top character than Alex, but nothing wrong with having some fun, right? The story still doesn't have a name, but here is the beginning. (The completely unedited beginning.)

Anette passed a long row of beat-up cars and stepped into a dark repair shop. Three vehicles were on lifts, and the men working on them looked like they could get a wheel off using only their fingers.
She said, "Excuse me..."
The closest giant nodded to the side, and now when her eyes adapted from the bright sunshine outside, she made out a counter. The woman manning it didn't look too interested, but she was probably still Anette's best chance.
“I’m here to check on my car. It’s an o-two Impala. Gold. Had problems with the tranny.”
She held out the ticket, but the woman didn’t even look. She blew a bubble and popped it before answering in a broad Russian accent. “I don’t know. I haven’t seen anything about an Impala. Do you see it?”
“I do not. Maybe you could check some of your papers? Or your computer? Compare the number on here with your system?”
It sounded snarkier than she intended, but she needed the car and this person wasn’t even trying to help. How had her precious vehicle ended up in this dump?
That’s what she got for asking an ex for help. Like he would actually help her.
Idiot.
The receptionist, if that’s what she was, might not know how to use a computer. She was probably hired more on looks and appeared to compete with the vulgar calendars on the wall. She didn’t have a car or a motorcycle between her legs, but she did have a bright red miniskirt, a flowered top that left little to the imagination, and high-heeled shoes that would make Anette fall and break something. She was also thin enough to fly away on the smallest whiff of wind.
I can still see your roots. Making hair that dark peroxide blonde can make it fall off. If you don’t find my car, I hope it falls off.
All this anger was bad for her karma, but at the moment, she didn’t care.
The woman leaned over the counter and hollered, “Valentin!”
What is this? A bad gangster movie?
The man who sauntered over was tall with shoulder-length brown hair that needed a wash, and about two days’ worth of stubble. He wore black jeans, a leather vest, and several long necklaces. His breath made her want to wave a hand in front of her face; he was clearly plastered and smelled like he bathed in alcohol.
Cleaned up and sober he’d look good, especially with those muscles. Right there and then, towering over her, he was about the scariest thing she’d seen.
“What’s the problem?”
He too had a Russian accent. Of course he did.
“I’m looking for my car. You were supposed to replace the transmission.”
He made an innocent gesture. “I don’t know. What car? We fix cars. Maybe it’s stolen, it happens.”
“What do you mean stolen? You guys were supposed to replace the transmission, not lose it.”
The man gazed into her eyes, clearly trying to make himself irresistible. She crossed her arms over her chest and glared. Playing nice would probably get her further than being angry, but she was barely able to keep her voice in check.
“I need it. Please try to find it.”
He stared at her a moment longer and shrugged.
“Mikhail! Have you seen this lady’s car?”
A man if possible even more in need of a bath came out from behind a minivan, drying his oily hands on a rag. Valentin was tall, but this man must be part giant.
“I don’t know. What kind of car.”
“It’s an…” He waved his hand towards her.
“It’s an Impala.”
The giant said, “No.”
Anette drew a deep breath and forced herself to relax her shoulders.
“You will find my car, and you will fix my car, or I will return with a friendly police officer who will investigate what happened to my car.”
Valentin said, “No.”
She said, “Yes.”
He frowned and glanced over his shoulder. “Mikhail, find her car.”
She shook her head and headed towards the outside. There was sunshine and a real world populated by real people.
“I’ll be back tomorrow.”
She didn’t expect the Russian drunk to follow her. Thank goodness she’d asked the taxi to wait for her, or she might have been stuck with this chop-shop caricature.
He held the car door open. “I like your spirit. You come work for me.”
“No.”
“Yes. I can get you new car, good pay, other… job.”
“I have no idea what you’re talking about, but it’s still no.”
He shook his head a little. “Shame. Well, think about it.”
She slammed the door shut. “Please drive. Get us out of here.”
The taxi driver said, “Not a place I would choose personally. Don’t mess too much with those guys.”
“I didn’t choose it. My ex dropped it off here, probably as punishment.”