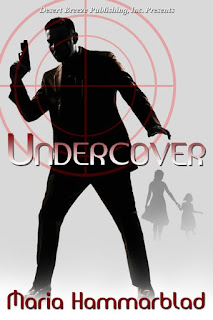 Undercover was my first book that wasn't science fiction, and as such it has always been an outsider amongst my work. It has been with me for many years, I think I wrote the first parts of it back in 2006, and the characters have been part of my life for so long I sometimes forget they're not real people.

There was a time when the manuscript grew to unmanageable size, and then it shrunk down again to a somewhat more normal format.

So, what is it about?

Jenny Moore is good at her job. Her colleagues have become family and her life is enriched by both good friends and a cat with personality. But there's still something missing. She longs for adventure -- in a nice moderate dose that will fit in with the rest of her life.

When Alexei Roshenko steps over her threshold the tall, dark, and handsome stranger sweeps her off her feet. He appears to be the answer to every romantic fantasy any woman ever had, and to make things better, he's mysterious and exotic.

There's more to Alex than meets the eye -- a dark, violent past is catching up with him. When Jenny acts on a whim and follows him to Russia, she soon finds herself entangled in a web of deceit and secrets beyond her wildest imagination.

Survival will depend on an inner strength she didn't know she possessed, and only one thing is certain: life will never be the same again.

While Alex loves his family, he isn't really a good guy in the eyes of society, and this caused problems in the book. As much as he struggled with himself and the darkness within, the original version of him wasn't likable enough. To solve the problem, we cut out a lot of his missteps. You can read one of the deleted portions here.